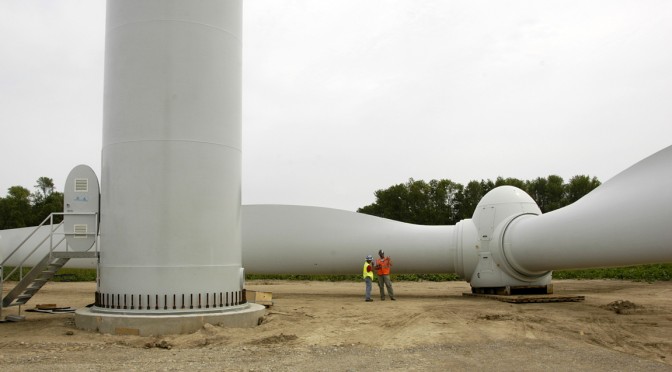 Without a turn toward long-term policy stability and predictability, the U.S. wind energy market is likely to settle out at somewhere between 4 to 8 gigawatts (GW) from 2017 on, according to presentations at today’s Market Update session at the WINDPOWER 2013 Conference & Exhibition in Chicago.

The speakers included Andy Lubershane of IHS EER, Justin Wu of Bloomberg New Energy Finance, and Dan Shreve of MAKE Consulting. Among the highlights of their discussion:

– According to Mr. Lubershane, wind power with the existing Production Tax Credit (PTC) incentive is very inexpensive and competitive in high-wind regions: “At least 500 megawatts is reflected in a series of recent utility requests for proposal (RFPs) on the basis of low cost” rather than state renewable portfolio standard (RPS) requirements. Conversely, he said, wind power does not begin to undercut the high-end price forecast for natural gas until near the end of this decade.

– While state RPS policies are creating near-term demand for renewable energy credits (RECs) in some regions, there are also challenges for wind development in those regions. For example, New England and New York have strong renewable standards, but their wind resources are not too energetic. The best resources in the region are in northern Maine, which does not have adequate transmission capability to handle a lot of wind generation.

– In California, another potentially strong market due to its large electricity demand and ambitious RPS, wind is facing strong competition from solar power, which enjoys an Investment Tax Credit incentive that is in place through 2016. When a utility looks at that certainty versus the PTC, currently scheduled to expire at the end of this year, “it makes all the difference,” Mr. Lubershane said.

– There is a modest but growing discretionary market for renewable energy, according to Mr. Wu of Bloomberg New Energy Finance. That market, he said, includes the U.S. military, which is ramping up its purchases of green power, and corporations purchasing wind power to burnish their “green credentials.”

– The presenters foresee another boom and bust for the wind energy industry if the PTC is allowed to expire again, with the market eventually stabilizing around “economic build” in the states where wind is more competitive and discretionary purchases. One promising new market on the basis of wind’s current economics is the Southeast, where several utilities have purchased wind from the Plains states in recent months due to its very low cost.

– The price of natural gas is the “elephant in the room,” with some forecasts seeing it remaining as low as $4.50 per million Btu for several years and others showing a gradual rise to around $6 due to increasing demand. Slow overall electric load growth, which has exerted a drag on wind and other energy sources in recent years, is expected to continue. The one exception to this picture? Texas, Mr. Wu said, and especially west Texas and the Panhandle area, where new oil and gas development is creating increased demand and new transmission lines are under construction.

– The drive for competitiveness is fostering strong interest in wind turbine operations and maintenance (O&M), with many wind farm owners becoming more directly involved as a means of reducing cost and technical risk and component manufacturers considering O&M efforts as a way to diversify their income stream from wind energy. Said MAKE Consulting’s Mr. Shreve, “We’re seeing a lot of concern about unscheduled maintenance– things not planned for, such as gearbox failures and blade issues. There’s a huge amount of attention being paid to this [O&M] space.”