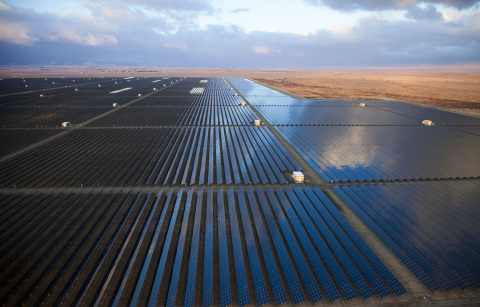 Alpine is one of eight large-scale photovoltaic solar facilities owned by NRG.

NRG Energy, Inc. (NYSE: NRG), through its wholly owned subsidiary NRG Solar, announced that it will commemorate the opening of the Alpine Solar Generating Facility in Lancaster, Calif., at a ribbon-cutting event later this morning.

The 66 megawatt (AC) Alpine solar photovoltaic facility, which started commercial operations earlier this year, is currently the largest fully operational solar plant in California. The cost-competitive, renewable power generated by the facility is being sold to PG&E under a 20-year power purchase agreement.

“The opening of Alpine marks a dramatic shift in the way energy is generated in California,” said Randy Hickok, senior vice president of NRG Solar. “As the largest operating photovoltaic facility in the state, Alpine is not only providing PG&E with a renewable source of energy, but contributing to cleaner air and a smaller carbon footprint for the state, ultimately helping meet California’s renewable portfolio standards.”

Located in northern Los Angeles County, Alpine will generate enough energy to meet the annual needs of approximately 53,000 homes at peak daytime capacity. Because the facility produces electricity without fossil fuels, it helps avoid the annual emission of 36,000 tons of carbon into the atmosphere, or the equivalent of taking 6,600 cars off the road.

Alpine is one of eight large-scale photovoltaic solar facilities owned by NRG that currently produces clean solar power for thousands of homes and businesses in three states. The other seven completed or partially completed plants are Agua Caliente (under construction) and Avra Valley in Arizona; Roadrunner in New Mexico; and Avenal, Blythe, Borrego and California Valley Solar Ranch (under construction) in California.

About NRG and NRG Solar

NRG is at the forefront of changing how people think about and use energy. We deliver cleaner and smarter energy choices for our customers, backed by the nation’s largest independent power generation portfolio of fossil fuel, nuclear, solar and wind facilities. A Fortune 300 company, NRG is challenging the U.S. energy industry by becoming the largest developer of solar power, building the first privately-funded electric vehicle charging infrastructure, and providing customers with the most advanced smart energy solutions to better manage their energy use. In addition to 47,000 megawatts of generation capacity, enough to supply nearly 40 million homes, our retail electricity providers – Reliant, Green Mountain Energy and Energy Plus – serve more than two million customers. More information is available at www.nrgenergy.com. Connect with NRG Energy on Facebook and follow us on Twitter @nrgenergy.

NRG Solar LLC, a subsidiary of NRG, has more than 2,000 MW of photovoltaic and solar thermal projects in operation, under construction or in development across the southwestern United States. More information is available at www.nrgsolar.com.