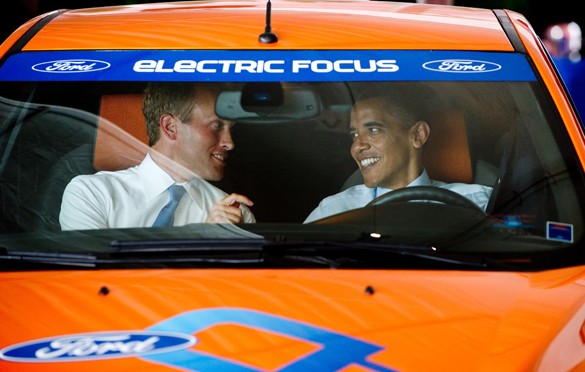 No matter how you look at it, electric vehicles aren’t going to replace the world’s internal combustion engine-driven cars and light vehicles overnight. But what about 20 years from now?

According to a Monday report from the Institute for Energy Efficiency (IEE), even by 2035, electric vehicles will make up no more than 30 million of the 261 million light-duty cars, trucks and vans on the road, or about 12 percent of the world’s fleet — and that’s a best-case scenario.

IEE puts its mid-range scenario at 25 million EVs by 2035, adding up to one in ten vehicles on the road. But its most conservative (that is, pessimistic) scenario puts EV penetration at only 5 million vehicles, or about 2 percent of the world’s fleet by then.

The Advanced Battery scenario “shows the importance of the initial purchase price (influenced by battery costs), and the value of having enhanced vehicle utility through range extension and reduced charge time,” the report states, indicating three critical battery technology features that need to be improved, in terms of energy storage capacity, power capacity, and of course, cost. While range extension and cost factors rely on improvements in battery technology and vehicle engineering, charging time is more a matter of building the fast-charging infrastructure to “refuel” EVs at a speed approaching the time it takes to fill a gas tank.

IEE’s high-range EV adoption scenario takes fossil fuel prices into account, by presuming a rise from about $145 a barrel for the mid-range case to more than $200 per barrel by 2035, and comes up with a slight bump from 25 million to 30 million vehicles. “It is interesting to note that High Oil price alone does not induce that many more consumers to purchase electric LDVs,” the report stated, largely because initial price remains the most important variable for car buyers.

About 31 percent of U.S. greenhouse gas emissions can be tied to the burning of fossil fuels in the transportation sector,” the report notes. About 60 percent of that is made up of light-duty vehicles, which make up only 1 percent of electric powered transportation today (electric buses, trains and trolleys make up the vast majority of today’s “EV” fleet).

As part of its role as a nonprofit research arm of the utility trade group Edison Electric Institute, IEE’s report also adds up the electric generation required to power all these new plug-in vehicles, as well as a greenhouse gas footprint of what’s expected to be the power mix by 2035.