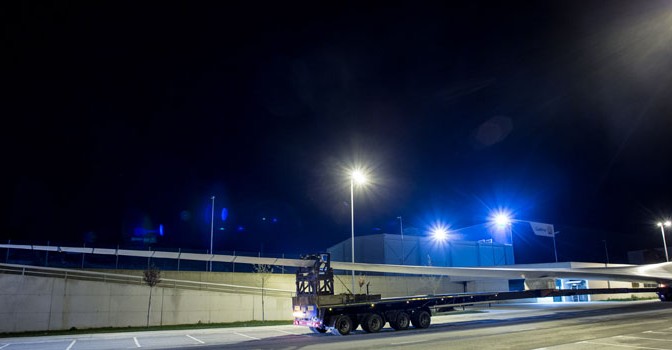 Gamesa, a global technology leader in the wind power industry, has marked further progress on its offshore strategy by shipping components for its 5 MW marine turbine from the port of Bilbao to the Canary Islands (Spain).

The company thus begins the process of erecting Spain’s first-ever offshore wind turbine, at the Arinaga Quay (Gran Canaria, in the Canary Islands).

Gamesa is loading today the turbine’s three blades, nacelle and tower onto a ship bound for the Canary Islands:

After the ship docks at the Arinaga Quay in the next week, Gamesa will begin assembling the prototype of its G128-5.0 MW offshore turbine. The company expects the turbine to begin operating in the second quarter of this year and aims to secure certification in subsequent months. Certification will enable Gamesa to install an initial series of the turbine in 2014. In addition to its 5 MW offshore system, Gamesa plans to develop higher-capacity offshore turbines (7 MW-8 MW) in the medium to long term.

Gamesa in late 2012 obtained design certification for its offshore turbine from independent organisation DNV. The DNV endorsement heralded a major leap forward in the system’s development, as a guarantee of the turbine’s launch, commercial rollout and manufacture in coming years.

This offshore system, with a rotor diameter of 128 metres and a modular, redundant design, ensures reliability and maximises energy output. Gamesa’s G128-5.0 MW offshore turbine is equipped with the technology Gamesa has proven and validated in its 4.5 MW system, plus the know-how and experience acquired during the 4.5 MW’s rollout. The company invested more than half a million engineering hours in the turbine’s design process.