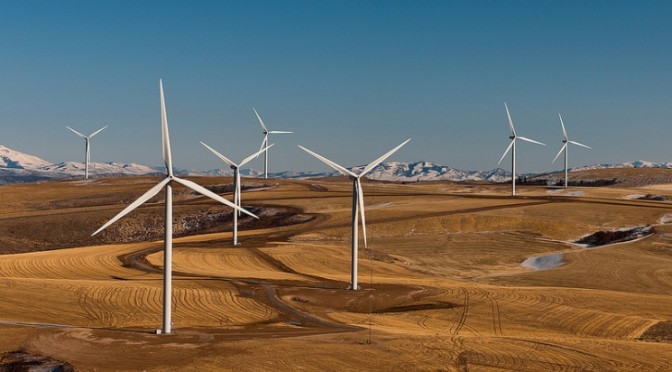 Wind energy grew 28 percent in America last year, setting a new installation record and confirming its status as a mainstream energy source, according to the American Wind Energy Association’s U.S. Wind Industry Annual Market Report for 2012, released today on a webinar for association members and reporters.

In its best year ever, the U.S. industry topped all energy sources with 42 percent of all new U.S. electric generating capacity. Over 6,700 new wind turbines were erected, which produce enough electricity to power the equivalent of 3.5 million homes. Overall, America finished the year with 45,100 wind turbines that can power 15.2 million homes.

The bumper crop of wind energy benefited the U.S. economy across all 50 states, through $25 billion in private investment in new U.S. wind farms, tens of millions of dollars paid to landowners and local communities in lease payments and property taxes, and billions in projected savings for electricity consumers.

In fact the impact of wind power development was so strong that an industry analyst said it caused a noticeable uptick in the entire U.S. economy in the fourth quarter.
“We had an incredibly productive year in 2012,” said Rob Gramlich, Interim CEO of the American Wind Energy Association (AWEA). “It really showed what this industry can do and the impact we can have with a continued national commitment to renewable energy. We’re doing what Americans overwhelmingly say they want: making more clean, renewable energy, and creating good jobs in U.S. factories.” AWEA’s report found that over 550 factories across the country provide parts and services for the wind energy industry, which provided 80,000 American jobs in 2012.

Wind power also helped address the disaster-level drought affecting half of U.S. counties by saving over 35 billion gallons of fresh water (120 gallons for every American), versus other water-intensive energy sources. And, it avoids over 4 percent of carbon dioxide emissions in the power sector annually.