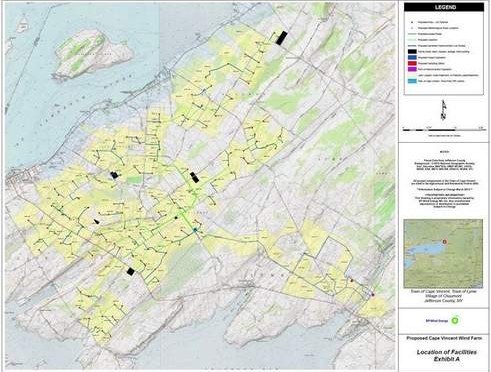 The preliminary scoping statement for the proposed Cape Vincent Wind Farm was filed Friday, triggering a three-month countdown to BP Wind Energy’s anticipated application to the state siting board.

Under the state’s Article X siting process, BP can submit an application for a certificate of environmental compatibility and public need for its 124-turbine wind project 90 days after filing the PSS.

The wind developer has yet to make public the exact size of the proposed project, and continues to use a range of 200 to 285 megawatts to describe the wind farm’s energy output capacity, which would determine the size of individual turbines.

Clifford P. Schneider, a Cape Vincent town councilman who serves on the town’s Article X advisory committee, said the committee skimmed through the document Friday and will meet again Thursday to study the statement further before presenting its findings and making a recommendation to the town board.

BP’s statement does not appear to contain any new information regarding the developer’s plan but provides responses to numerous comments and questions raised by stakeholders, including the Cape Vincent Town Council.

The PSS reveals that BP had considered a 135-turbine project but determined it would “pose equal or greater risk of adverse environmental impacts while yielding equal or less electrical output.”

Also, in its PSS, the wind developer argues that local zoning laws “unjustifiably and unreasonably” restrict the placement of turbines through large setbacks and strict noise caps, among other constraints.

BP decided in September to seek a state Article X process for its wind project in Cape Vincent as it allows a state siting board to overrule what it deems to be unreasonable local laws.

“The setback requirements as stated in the CV (Cape Vincent) zoning law have the effect of unjustifiably and unreasonably restricting the placement of turbines in agricultural districts and preclude CVWP (Cape Vincent Wind Project) from placing turbines in planned and/or optimal locations within the town,” BP said in the PSS.

Regarding setbacks, the developer states that its project “maintains setbacks to residences at one-quarter of a mile, which meets or exceeds the previous setback for residences held for either of the predecessor projects and is believed to be adequate to address health and safety concerns.”

“Sound emissions from the turbines once the project is operational could be audible at residences and other potentially sensitive receptors within the project area and a potential will exist for annoyance and complaints. Analyses will be carried out to tabulate the sound levels at each residence due to the project alone and the cumulative level as stipulated in Section 1001.19(f) of Article X. Impacts from low frequency noise, amplitude modulation, or tones are not expected to be significant but will be evaluated in the study,” the developer said.

Turbine noise in particular has drawn a lot of concern from the public and local officials.

The Town Council has been asking other municipalities to support a resolution calling on the state Public Service Commission to halt the siting of all wind energy generating facilities.

Citing a noise study conducted on behalf of Wisconsin’s PSC, local officials argue that further studies into low-frequency noise and infrasound are needed to ensure the health and safety of their constituents.

However, BP responds to these concerns in its PSS by stating that “the actual finding of the Wisconsin PSC study was that the levels of infrasound from the project turbines were extremely low and most likely similar to or equivalent to the natural environmental sound level at those frequencies inside of each tested residence.”

The wind developer also states that it is “not possible to predict or calculate the infrasonic sound emissions from any wind turbine.”

The developer said it also will identify and map “sensitive visual resources” and evaluate the effects of wind turbines on wireless signals – such as radar, radio, cellular, GPS and LORAN (Long Range Navigation).

“Impacts on industries in the project area must be carefully considered, particularly on agriculture, tourism, and housing. The placement of Project facilities on agricultural land may decrease productivity on cropland by removing agricultural land and by requiring farmers to maneuver machinery around structures,” the developer said. “Although no recreational or tourist facilities will be displaced by the Project, other than potentially some snowmobile trails, the turbines will be visible throughout the area and could affect the area from a recreational and/or tourist perspective based on viewer attitudes on the aesthetics of wind turbines.”

BP also plans to prepare a decommission plan that will include a quantification of the salvage value of the project’s components and cost of decommissioning.

“While wind farms are designed to operate for 20 years, there is no certainty that the project’s power will be marketable at the end of 20 years,” BP said. “If the project is not able to sell its power through a power purchase agreement or in the wholesale energy market, it is possible that the project will be uneconomical to continue to operate.”

Until then, however, BP believes the proposed wind farm will benefit the communities involved.

Cape Vincent Wind Farm intends to employ 10 to 15 full-time workers permanently for the operation and maintenance of its facility, BP said.

“Local spending will result in increased tax revenue for the Towns of Cape Vincent and Lyme. The project will provide revenues to the local communities through property taxes or through payment-in-lieu-of-taxes (PILOT) arrangements. Increased municipal revenues will benefit the school districts, emergency services, and essential infrastructure.”

BP also is proposing to run a 6- to 7-mile transmission line connecting its wind farm to a substation in the town of Lyme.

The wind developer also is required to provide $99,750 in “intervenor funds” to help municipal and local parties defray the cost of participating in the preapplication phase of the Article X process. Half of the funds, $49,875, are reserved for municipalities.