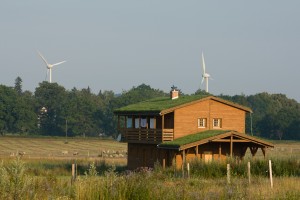 “I tried to change things on a national political level but I had to recognise that it wasn’t possible,” says Petr Pavek, leaning against his straw bale house.  He gazes out on his property over-looking the little town of Jind?ichovice pod Smrkem in the Czech Republic. In the fields below organic vegetables grow, and cows for organic beef graze on the pasture. A totem pole stands next to his pond and a green roofed garage melds into the landscape. In the village a dog barks, and a lone car rumbles along the road.

Jind?ichovice seems like any other quiet town in rural Czech Republic. But from where Pavek stands, the view is drastically different. In the distance, two wind turbines lazily turn in the evening breeze. Beyond, eight sustainable houses stand in a row. Powered by renewable energy, these green-roofed houses were built to attract young people back to the community. When they were completed, over 100 applications poured in. The community selected eight families and sold the houses at cost price.

It was Petr’s vision as mayor of Jind?ichovice, and that of his team, which has developed a different future for this community. Petr’s renewable energy mission and his desire to have a sustainable, local economy was the driving force behind getting the two wind turbines built. Now, the profit from the wind turbines is recycled into the community and the money is allocated for natural initiatives around the town. 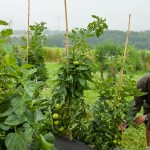 Petr ventured for a time into the national political scene. Unfortunately, his ideas of sustainable, community-based development never gained traction in the heavily fossil fuel influenced government and he burned out. He returned to Jind?ichovice pod Smrkem, gave up national politics and took up his organic lifestyle.

“There is no way to change it. In the political way, you can’t change it, the only thing you can change is your own life,” says Petr Pavek “And I did, I do. As a mayor, I could change the life and the using of renewable and wind energy in my small town, but more, I couldn’t do. I tried to help wind energy and renewable energies become more common in Czech Republic, but the enemies are too powerful and it is difficult to fight them.” 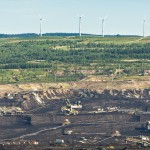 A coal mine in Northwesten Czech Republic

Petr decided that it was time to get out of politics and moved back to Jind?ichovice to become an organic farmer. He is busy with a plethora of projects. Buildings sit around the property in differing states of construction. He is conducting little experiments with compost, weeds, soil and vegetables and their interaction with each other. He has planted a garden in a Native American tradition, corn and pumpkins with bean vines growing up the corn. Most of his income is derived from organic cattle and he is enjoying spending more time with his family.  He sums it up with, “I want to live an easy life, transparent in nature.”