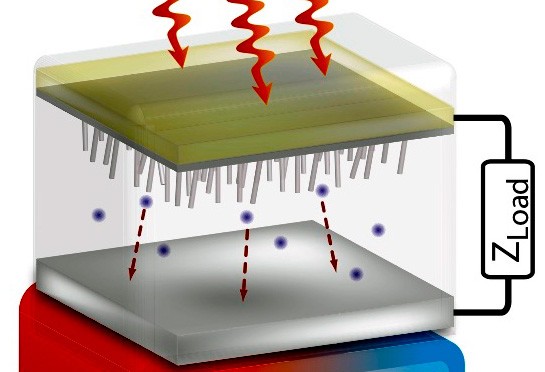 Scientists working at the Stanford Institute for Materials and Energy Sciences (SIMES) have improved an innovative solar-energy device to be about 100 times more efficient than its previous design in converting the sun’s light and heat into electricity.
“This is a major step toward making practical devices based on our technique for harnessing both the light and heat energy provided by the sun,” said Nicholas Melosh, associate professor of materials science and engineering at Stanford and a researcher with SIMES, a joint SLAC/Stanford institute. The new device is based on the photon-enhanced thermionic emission (PETE) process first demonstrated in 2010 by a group led by Melosh and SIMES colleague Zhi-Xun Shen, who is SLAC’s advisor for science and technology. In a report last week in Nature Communications, the group described how they improved the device’s efficiency from a few hundredths of a percent to nearly 2 percent, and said they expect to achieve at least another 10-fold gain in the future.
Concentrated sunlight heats up the device’s semiconductor cathode (beige and grey upper plate) to more than 400 degrees Centigrade.
Photoexcited hot electrons stream out of the cathode’s nanotextured underside down to the anode, where they are collected as direct electrical current. Additional solar and device heat is collected below the anode to run electricity-generating steam turbines or Stirling engines. Credit: Nick Melosh Conventional photovoltaic cells use a portion of the sun’s spectrum of wavelengths to generate electricity.
But PETE uses a special semiconductor chip to make electricity by using the entire spectrum of sunlight, including wavelengths that generate heat. In fact, the efficiency of thermionic emission improves dramatically at high temperatures, so adding PETE to utility-scale concentrating solar power plants, such as multi-megawatt power tower and parabolic trough projects in California’s Mojave Desert, may increase their electrical output by 50 percent. 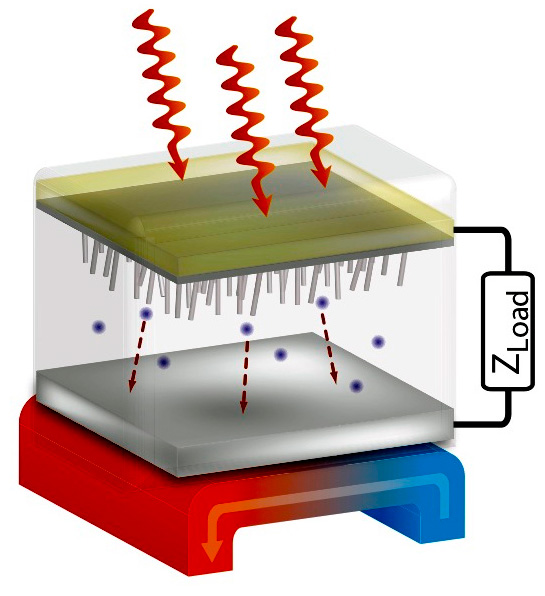 Those systems use mirrors to focus sunlight into superbright, blazingly hot regions that boil water into steam, which then spins an electrical generator. “When placed where the sunlight is focused, our PETE chips produce electricity directly; and the hotter it is, the more electricity it will make,” Melosh said.
The heart of the improved PETE chip is a sandwich of two semiconductor layers: One is optimized to absorb sunlight and create long-lived free electrons, while the other is designed to emit those electrons from the device so they can be collected as an electrical current.
A cesium oxide coating on the second layer eases the electrons’ passage from the chip. Future research is aimed at making the device up to an additional 10 times more efficient by developing new coatings or surface treatments that will preserve the atomic arrangement of the second layer’s outer surface at the high temperatures it will encounter in the concentrating solar power plant.
“We expect that other materials, such as those incorporating barium or strontium, will make the surface much more stable up to at least 500 degrees Celsius,” said Jared Schwede, a Stanford graduate student who performed many of the PETE experiments. (play video to see Schwede explain the PETE technology) An additional challenge will be to engineer the device to withstand the dramatic 500-degree daily temperature swings at solar power plants, as their systems heat up during the day and then cool down at night.
http://www.nature.com/ncomms/journal/v4/n3/full/ncomms2577.html
http://www.slac.stanford.edu/