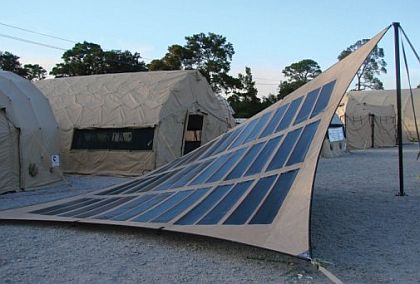 One example of this kind of photovoltaic fabric could involve a tent with fabric that captures and converts solar energy into usable electricity.

U-Mass Dartmouth also has a grant to work with Konarka Technologies Inc. in Lowell, Mass., to make photovoltaic fabrics for the U.S. Army, which could be integrated into clothing and backpacks. Konarka is a developer of flexible solar power.

The Army Natick contract to U-Mass Dartmouth, awarded in late February, is a cost-reimbursement type action, rather than a fixed-price contract because of uncertainties involved in the project.

U.S. Army researchers are working together with solar power experts at the University of Massachusetts at Dartmouth in North Dartmouth, Mass., to find ways to develop fabric with photovoltaic qualities to create tents, clothing, backpacks and other soldier items that can generate electricity.

The Army Photovoltaic Fabrics programs seeks to develop prototype fabric that is able to produce electrical power for military renewable energy. Such fabric potentially could be made into tents, clothing, backpacks, or other items to help soldiers in the field generate electricity for communications equipment, surveillance systems, or other military systems.

U-Mass Dartmouth Materials and Textiles Department is working on solar energy technologies involving photovoltaic textiles, nanomaterials, and other technologies to capture energy from the sun’s light and heat.