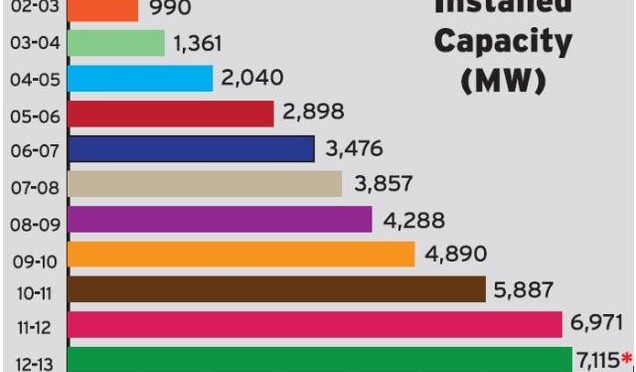 New wind power plants of 1,084 MW capacity were commissioned last year, which was one third of what the country achieved during 2011-2012.

Tamil Nadu tops the list of States in wind energy with an installed capacity of about 7,100 MW, accounting for around 40 per cent of wind turbines in India.

Given the fact that barely 200 megawatt (MW) has been added during the current year, any announcement on providing a concession or two to the sector should have, normally, attracted an all-round appreciation from the experts.

Specialists who are part of the policy-making process say those who are looking at wind power sector for the purpose of tax breaks would not feel enthused merely by the re-introduction of GBI, which can, at best, increase their annual revenue by 10 per cent without providing much on capital investment.

They also point out that when the GBI was launched in 2008 end, it lasted till March 2012. Besides, under the present circumstances, solar energy sector looks more lucrative, they point out.

When the GBI was in force previously, an incentive of 50 paise per unit of electricity fed into the grid was provided for a period not less than 4 years and a maximum period of 10 years with a cap of Rs. 62 lakhs per MW.

However, D. V. Giri, secretary general of the Indian Wind Turbine Manufacturers’ Association, differs with this view and says that what is more significant is that the role of wind energy has been acknowledged in the budget document which is uncommon.

Despite the State having lower tariff (Rs. 3.51 per unit) compared to other States and problems in payment of bills, a considerable section of investors would be tempted by the budget announcement. In view of the hitches in payment of bills in the State, they can opt for group captive sale instead of selling power to the Tamil Nadu Generation and Distribution Corporation. 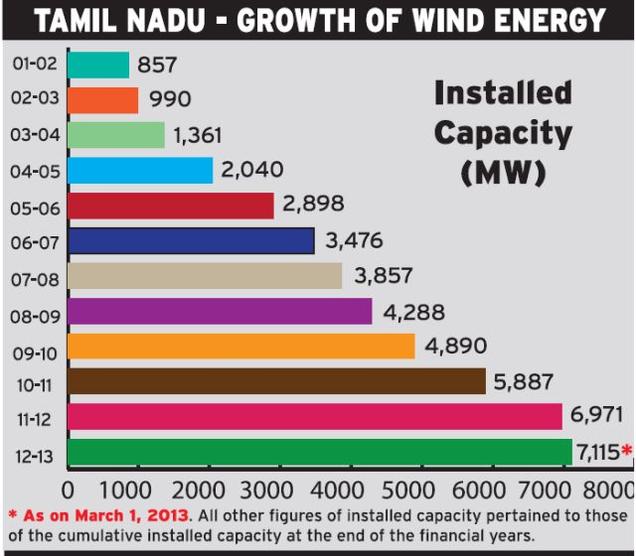 Mr. Giri argues that if the new scheme envisages an incentive of 50 paise per unit with a revised ceiling of Rs. 1 crore, a wind mill of one MW, having a plant load factor of 20 per cent, will yield reasonable returns in 10 years, which was the maximum period permitted under the previous GBI scheme.

Pointing out accelerated depreciation (AD) was allowed till March last year, he concedes that AD, which allows faster depreciation of the value of wind mills and thereby enables project developers to defer corporate tax remittances, will be extremely beneficial to profit-making small and medium enterprises.

It was because of the AD factor that textile, engineering and cement factories, essentially energy guzzlers, went in for wind mills and enjoyed the benefit of banking and wheeling, which facilitated them to adjust their consumption against generation.

Leaving aside the GBI issue, the Union budget does not seem to have produced cheer from the State power utility.

The Tamil Nadu Generation and Distribution Corporation (Tangedco) meets a portion of its coal requirements by importing 2.5 to three million tonnes annually at an estimated cost of Rs.2,000 crore. But, the Railway budget will take away more than what is sought to be provided through the Union budget, as 5.5-per cent-hike in coal freight has been announced.

As domestic coal mines are located several thousand km from power plants in the State, the Tangedco spends Rs. 1,200 crore towards coal transportation and its additional expenditure is expected to be at least Rs. 65 crore.