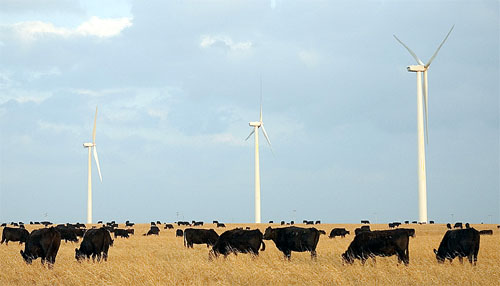 Legislation has recently been introduced in the Kansas state legislature that threatens the future of the state’s renewable energy development.  I urge you to write to your state officials today and encourage them to oppose all legislation that delays, reduces, or repeals efforts to expand Kansas’s renewable energy development.
Kansas currently has a renewable portfolio standard (RPS) that calls on the state’s utility companies to secure a growing percentage of their electricity from renewable resources.  The specific target that they are working toward is 20% by 2020.
This target has driven tremendous wind power growth over the past several years.  According to a report released this past November, last year alone, $3 billion of private money was invested in Kansas wind projects.
Other highlights from the report include:
– Many Kansas farmers and ranchers lease land to wind project developers, and they receive $13 million annually in return.
– In addition to wind project development, Kansas has seen wind-related manufacturers set up shop in the state, adding to the 13,000 jobs that the Kansas wind industry supports directly and indirectly.
– The Kansas Corporation Commission has stated, “Natural gas, coal, and wholesale power prices have all experienced significant volatility and upward trending costs. Wind generation provides value as insurance for customers from some of the effects of unexpectedly high and volatile fuel and wholesale energy prices.”
The Kansas state legislature has introduced bills that threaten the state’s RPS policy.  In the Senate, SB 82 would delay the timeframe in which utilities would have to secure 20% of their electricity from renewables, and would also allow utility companies to opt out of doing so.  In the House, HB 2241 would call for utilities to secure only 15% of their electricity from renewables by 2018, and leave it at that.  Several Kansas utility companies have already met the interim RPS targets – and others have far exceeded them. There is no need to slow down the progress that the RPS has made.  Preserving Kansas’s RPS targets will ensure that wind energy-related jobs and investments continue to develop in Kansas, rather than in neighboring wind-rich states.
I urge you to contact your state-level elected officials today and urge them to stay the course on wind energy.   Tell them that the state RPS policy is driving clean, homegrown, affordable wind power in Kansas, and you do not want to see that progress derailed.
Thank you so much for standing up for wind power!
Sincerely,