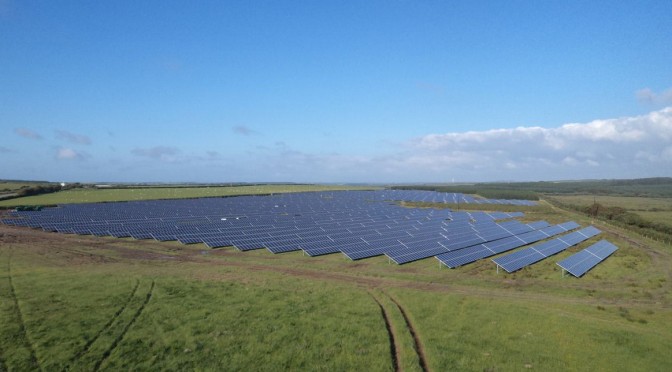 With its market entry in Tunisia, system supplier Conergy is expanding its international network into North Africa.

In a bidding process, Conergy won the order for what will be the second largest solar plant in the country at 210 kilowatt capacity.

The solar power plant will be producing clean electricity for a groundwater desalination plant in the arid desert region in Ben Guardane in Medenine province in the southeast of the country, not far from the holiday island of Djerba.

The desalination plant was inaugurated in November 2012 by the Tunisian Prime Minister Hamadi Jebali and now the construction works for the Conergy solar installation have started.

Once, the solar plant is connected the grid in March 2013, it will cover 70% of the desalination plant’s energy needs.

It will not benefit from any feed-in tariff, but will rely on own consumption.

The local water supplier and plant operator, Sonede, will be using 100% of the generated solar electricity for its desalination plant, which will enable it to supply the local population with a total of 1.8 million litres of drinking water every day.

Conergy Board Gorski: “The Middle East and North Africa are predestined for PV.”

“The Middle East and North Africa, the so-called MENA states, are predestined for solar power thanks to the prevailing extremely high insolation values,” said Conergy Board Member Alexander Gorski. “According to experts, there is a potential of around 7 gigawatts by 2020 and 37 gigawatts by 2030 for the entire MENA region. The main drivers of this expected growth are Saudi Arabia and Turkey. In many other countries, however, we are only at the beginning, as is the case in Tunisia. Solar has not played a large role there to date. But the Tunisian government is planning to expand renewable energies in the coming years and is making corresponding investments. Experts are therefore expecting a market potential of around 200 megawatt there by 2020.”

At 1 gigawatt of power obtained from renewable energy sources by 2016 and 4.7 gigawatts by 2030, the ambitious targets announced by the government in 2010 were considerably higher, but due to the political situation in the country after the revolution these figures are now hardly realistic. Nevertheless, experts expect that there will be considerable solar growth in future in the Maghreb state. This does, however, depend particularly on appropriate investments. There are currently no state subsidies in the form of feed-in tariffs in Tunisia, but the government’s plans include in particular a considerable expansion of the Tunisian power grid. That way, it hopes to make it possible in the long term to export electricity to Europe or to neighbouring countries.

The 4,000 square metre solar plant for the desalination plant is a non-refundable donation to Tunisia from the Japanese government. Conergy secured the order during a tender process won by the Japanese company and general contractor Takaoka Engineering Co.,Ltd. Acting as sub-contractor, Conergy has taken on responsibility for the planning and engineering of the plant as well as for the supply of the components and the construction of the park, for which the system supplier is collaborating with its local partner Bonna.

“The plant in Tunisia is a premiere in the truest sense of the word,” said Giuseppe Sofia, Managing Director of Conergy Italy. “The first solar plant for a desalination plant that we will be constructing in the country represents our first plant in the most easterly Maghreb state. It will also be the first time that our project teams and engineers from France and Italy will be collaborating on a project.”

In this arid region, which is known particularly for its high population of dromedaries and the tourist island of Djerba, around 900 Conergy PowerPlus modules installed on Conergy SolarLinea mounting systems will be producing 352 megawatt hours of clean electricity each year. The direct current generated by the modules will be converted into alternating current by 15 Conergy IPG T inverters before the desalination plant will use the energy to produce drinking water.

About Conergy
Conergy delivers solar energy systems from a single source. As a system supplier, Conergy offers all components for a solar installation as well as all related services.

With its portfolio of modules, inverters and mounting systems, the solar expert creates Conergy System Technology, which is efficient solar energy systems for private or commercial rooftops, as well as for multi-Megawatt Parks.