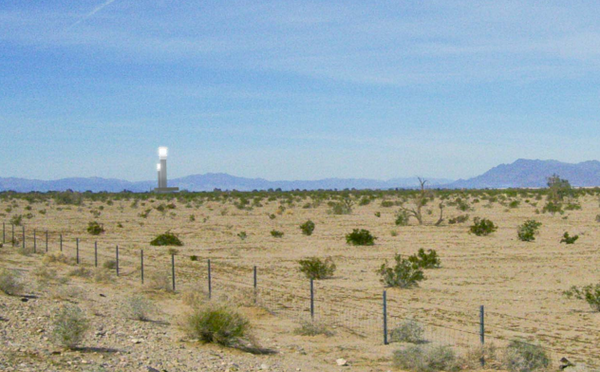 BrightSource Energy has provided the California Energy Commission (CEC) with more details on its proposed redesign of the Palen Concentrating Solar Power Plant and it looks like the project’s possible impact on habitat for the Mojave fringe-toed lizard will loom large in CEC’s decision to approve the project.

But Solar Millennium had planned to use concentrating solar trough technology for its version of Palen, and that’s a technology BrightSource doesn’t use.

Instead, BrightSource has proposed a redesign of Palen using its proprietary power tower technology, in which each of two 750-foot power towers would be surrounded by about 85,000 mirrored heliostats, which would focus solar energy on boilers atop the towers. Palen would have a total maximum capacity of about 500 megawatts.

Palen would be sited northeast of Desert Center on the eastern “shore” of Palen Dry Lake, whose fringing sand dunes provide important habitat for the Mojave fringe-toed lizard. The CEC’s Staff Assessment of the original Palen project noted that Solar Millennium’s design would eliminate 1,735 acres of habitat for the lizard, which at the time was projected by CEC and the BLM to lose 16 percent of its habitat throughout its range to solar development.

In supplementary documentation CEC made public to BrightSource’s petition to amend the project, the company projects that its redesign will alter 1,518 acres and change of the lizard’s habitat, a bit more than 200 acres of habitat saved as compared to Solar Millennium’s design.

The supplementary information doesn’t mention the relative quality of the habitat thus saved, an omission that will presumably be addressed at some point.

The redesigned Palen would also alter just under 3,000 acres of potential desert tortoise habitat. It’s very likely that the same concerns about impacts on birds of the project’s concentrated solar energy that helped compel BrightSource to mothball its Rio Mesa plant will apply to Palen, and BrightSource notes in the supplements to its petition that its assessment of those risks is forthcoming.

BrightSource is aiming to have the CEC approve its redesign by October 2013, at which point it can commence removing tortoises from the site.