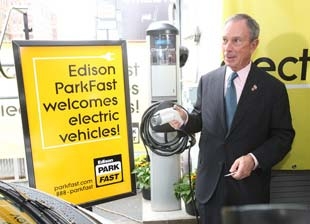 In his twelfth and final State of the City address, New York City Mayor Michael Bloomberg called to make the city a national leader in electric vehicles.

He will start with a pilot for curbside Level III fast chargers. More importantly, Bloomberg will change the building code so that up to 20 percent of new public parking spaces in private developments will be wired for electric vehicle charging. The change could create up to 10,000 parking spots over the next seven years. The chargers would not have to be installed during building, but rather the garages would be EV-ready whenever demand called for chargers.

The majority of charging happens at home, but in most parts of New York City, car owners are parked in garages or on the street. While public charging networks is more about relieving range anxiety in other cities, for New Yorkers, public charging will be essential to the success of the vehicles in the city.

“New York is taking a bold and proactive step to minimize the overall cost of establishing adequate charging supply and drive adoption of electric vehicles,” Paul Wessel, executive director of the nonprofit Green Parking Council, said in a statement. “Providing parking facilities with Level II EV charging is a critical way to foster the rapid development of electric vehicles.”

Bloomberg also wants to push the city’s taxi fleet toward electrification. The New York City Taxi and Limousine Commission is piloting six Nissan Leafs. He said during his State of the City address that the pilot was happening “with the goal of making one-third of our taxi fleet electric by 2020.”

The mayor also pointed to electrified transportation as job opportunity. Smith Electric Vehicles, which makes electric trucks, will open its first East Coast plant in the Bronx and will employ more than 100 people.

Bloomberg has waited until his last year in office to propose other changes to how the city does business in the realm of environmental sustainability. After the area was battered by Superstorm Sandy, Bloomberg called for the city’s largest corporations to cut their carbon footprints by 30 percent in the next ten years.

And, despite his ambitious PlaNYC 2030 that was delivered four years ago, it is only during his swan song that Bloomberg proposed overhauling the city’s recycling program. He will seek to expand plastics recycling (as a New York resident, this journalist can attest it’s pretty sad right now), implement food recycling pilots and a ban on polystyrene containers — a ban already in place in many of the country’s other leading cities.
Katherine Tweed, http://www.greentechmedia.com