China, US vie for wind power market leader position at just over 13 GW of new capacity each.

The Global Wind Energy Council released its 2012 market statistics today, showing continued expansion of the market, with annual market growth of almost 10%, and cumulative capacity growth of about 19%.

A record year for US installations and a slower market in China mean that the two countries all but tied for the top spot in 2012.

Both the Chinese and Indian markets slowed somewhat in 2012, with their annual installations coming in at 13.2 and 2.3 GW respectively. Market consolidation and rationalisation in China, and a lapse in policy in India were the main reasons, but these conditions are expected to be short-lived, and Asian dominance of global wind markets is expected to continue. 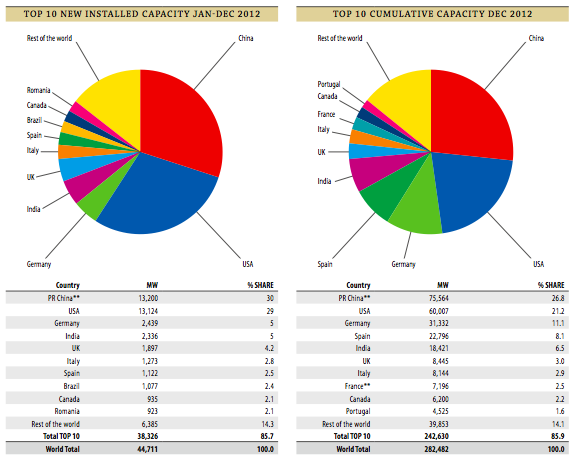 In a last minute rush due to the anticipated expiration of the US’ Production Tax Credit at the end of December, the US industry installed more than 8,000 MW in the fourth quarter of 2012, ending up at 13,124 MW for the year, for all practical purposes tied with China. The “13th hour” extension of the tax credit means that although the US market will slow substantially in 2013, it is unlikely to be as much of a slowdown as was expected, and the nature of the extension bodes well for the 2013 market. Canada had a solid year, and Mexico more than doubled its installed capacity, installing 801 MW for a total of 1370 MW, joining the list of countries (now 24) with more than 1,000 MW of wind power capacity. European markets, led by Germany and the UK, with surprising contributions from ‘emerging markets’ in Sweden, Romania, Italy and Poland, accounted for 12.4 GW last year, a new record . However, on-going sovereign debt crises mean that the outlook for the 2013 market is uncertain, although Europe’s framework legislation and its 2020 targets ensure a degree of stability. Europe also continued to lead offshore markets, with a 1,166 MW installed, more than 90% of total offshore installations of 1,293 MW in 2012.

Brazil led an otherwise relatively quiet Latin America market with 1,077 MW, to bring its total installed capacity to just over 2,500 MW, and Australia accounted for all of the new installations in the Pacific region, with 358 MW of new capacity in 2012 for a cumulative total of 2,584 MW. The MENA region had another quiet year, with only one 50 MW project completed in Tunisia, but sub-Saharan Africa’s first large commercial wind farm came on line in 2012, a 52 MW project in Ethiopia. “This is just the beginning of the African market,”, said Sawyer, “and with construction started on 500+ MW in South Africa, we expect Africa to be a substantial new market, where clean, competitive energy generated with indigenous sources is a priority for economic development.”