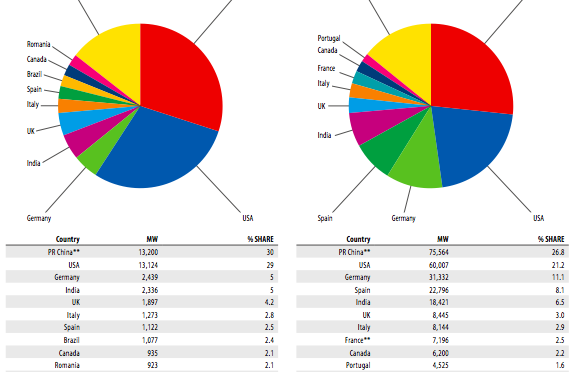 The US and China shared equal honours as the largest markets for new wind energy capacity in 2012, according to the latest data released by the Global Wind Energy Council.

According to the Global Wind Energy Council, the US enjoyed a late surge in installations caused by the expiry of a production tax credit (PTC) to reach 13,124MW of new wind energy capacity for the year, just shy of the 13,200MW installed in China.

Australia ranked 15th in installed wind energy capacity in 2012, adding 358 MW, according to the Global Wind Energy Council. Its total installed wind power capacity stands at 2,584MW, giving it a rank of 17th in the world, behind 11 European countries, China, India, Japan, the US and Canada.

Sawyer says the US market will likely slow in 2013, but not by as much as feared due to the “13th hour” extension of the tax credit.

Canada had a solid year, and Mexico more than doubled its installed capacity, installing 801 MW for a total of 1370 MW, joining the list of countries (now 24) with more than 1,000 MW of wind power capacity.

European markets were marked by strong contributions from ‘emerging markets’ in Sweden, Romania, Italy and Poland, although the outlook is uncertain for the 2013 market due to the on-going sovereign debt crises. Globally, 44,711 MW was installed during the year, with Asia leading the growth despite slight slowdowns in China and India.

The wind energy market grew 10 per cent in 2012 and has shows cumulative growth of almost 19 per cent in the last few years. Europe also continued to lead offshore wind power markets, with a 1,166 MW installed, more than 90 per cent of total offshore wind turbines installations of 1,293 MW in 2012.