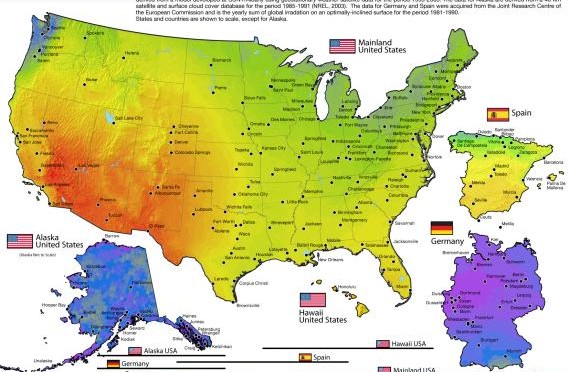 The main point here: Germany doesn’t get an enormous amount of sunlight, relatively speaking. Its annual solar resources are roughly comparable to Alaska’s. Just about every single region in the continental United States has greater solar potential, on average, than Germany.

Why the difference? Policy is the big factor. The German government has heavily subsidized renewable energy for years through a variety of measures. Perhaps most crucially, the country’s “feed-in tariffs” allow ordinary people to install solar panels on their rooftops and sell the power to the grid at favorable rates. (The costs are then shared by all electricity users.)

Solar installations are also much cheaper in Germany — about half as cheap as they are in the United States. Partly that’s because the industry is bigger. But a recent report from Lawrence Berkeley National Laboratory discovered a bunch of smaller factors, too. Permitting is easier in Germany. And German solar installers spend less on marketing, inspections, and grid-connection fees. That all adds up.

Now, there’s a crucial flip side to this story, too: Germany’s renewable-energy splurge isn’t cheap. This year, the average three-person family will likely have to pay an extra $220 on their electric bills to finance all that new wind and solar construction. And German lawmakers have debated whether to pare back the billions in feed-in subsidies for solar power, particularly since it’s a cloudy country and wind turbines are still a much cheaper form of clean energy. Still, as Oremus notes, there’s no physical reason why the United States couldn’t match or surpass Germany’s solar binge — we certainly get a lot more direct sunlight. (Oremus was rebutting a FoxNews segment claiming that Germany had more solar because it’s sunnier there.) It’s mainly a question of what energy policies the country prefers, and whether or not we want to pay more for solar or other carbon-free energy sources.

–Note that solar power has still been growing quickly in the United States, even if we’re not nearly at German levels. In 2012, rooftop solar installations likely doubled, thanks in part to investment tax credits that were part of the stimulus bill.

–Solar power is still one of the most expensive forms of energy around, but its costs have been dropping rapidly, thanks partly to improved technology and partly to a surge of Chinese manufacturing .