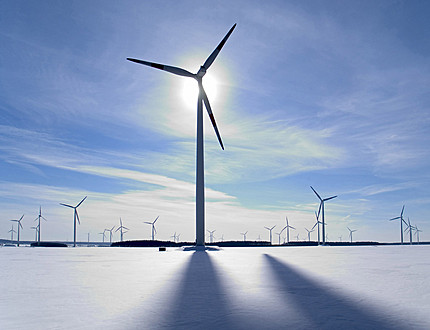 As wind turbines become an increasingly important source of energy, there is a growing need to better predict when ice forms on them and prevents electricity from being produced.

A research project at SMHI has developed new methods for projecting ice formation on wind turbines.

There is growing interest in wind turbines as an energy source in Sweden, but wintertime the turbines are affected by ice. As a result the wind turbines have to stand idle for a while so they are not damaged by the weight of the ice, and do not cause injury when the ice falls. In northern Sweden there are major problems from ice forming on wind turbines. Better models are therefore needed to predict when and how much ice will form.

“We have been able to identify when ice will form on the wind turbines in our projection models. This has been confirmed by the values for actual ice formation which we have collected from a number of control stations at various locations around Sweden,” says Esbjörn Olsson, a scientist at SMHI.

The conditions for ice to form vary with the landscape, which means that the projection model for ice formation must have a high resolution to provide reliable data.

“We have already been able to predict when ice will form on wind turbines, but the new method takes more factors into account and provides more detailed information about the formation. This can be used to develop customised forecasts,” says Mikael Magnusson, a meteorologist at SMHI.

Based on the new knowledge of ice formation, development work is in progress to predict loss of production. Wind turbines manufacturers are also delivering turbines with built-in de-icing equipment to an increasing extent.

SMHI has carried out the project alongside Uppsala University and Weathertech Scandinavia. The research project has been funded by the Swedish Energy Agency.