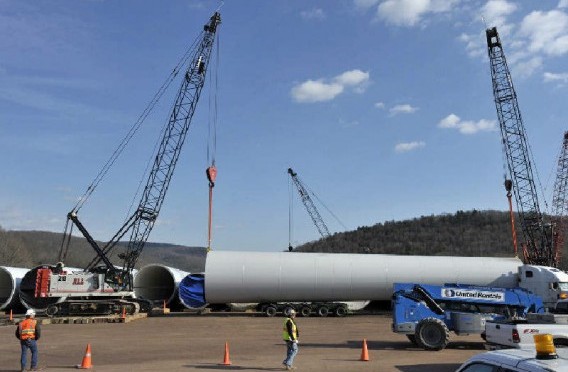 “This is a great project all the way around,” said Sempra US Gas & Power president and CEO, Jeffrey W. Martin. “The State of Pennsylvania has been a recognized leader in providing critical fuels to help grow our nation’s economy for over a century. This project continues in that proud tradition by harnessing clean, sustainable wind energy that will benefit mid-Atlantic customers for decades to come.”

Each of the 88 GE xle wind turbine generators on the farm has a rated capacity of 1.6 megawatts (MW). All together, they should produce about 141 MW of electricity. Long-term power purchase agreements, made possible by the National Renewables Cooperative Organization, are in place with Southern Maryland Electric Cooperative, Inc. and Old Dominion Electric Cooperative.

“Today’s announcement is an important milestone that marks yet another success for the BP and Sempra US Gas & Power teams that have worked so hard to deliver this project into full commercial operation,” said BP Wind Energy president and CEO, John Graham, in a recent press release. “We appreciate the on-going support that we have received at both the state and local level and look forward to a long-term partnership in the community.”

In addition to the contribution to the power supply in the region, the project created more than 400 jobs during the course of construction and about 10-15 permanent employees will be needed to maintain and monitor the facility, which will be operated by a wholly-owned affiliate of BP Wind Energy.

In the last five years, BP has made more investments in the United States than any other oil and gas company, investing more in the United States than in other countries. Since 2005, about $8 billion of BP Alternative Energy investments have gone towards alternative energy development. US BP Wind Energy has interests in sixteen wind farms that are located in nine states with a gross generating capacity of around 2,600 MW.