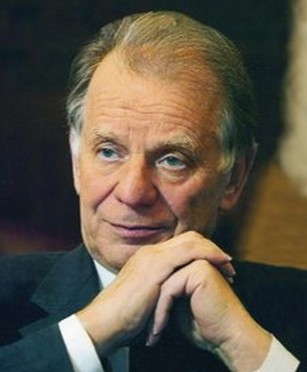 Zhores I. Alferov, Nobel Laureate, professor and president of the St. Petersburg Academic University of the Russian Academy of Sciences, and Viacheslav M. Andreev, professor and head of the laboratory of the A.F. Ioffe Physico-Technical Institute in St. Petersburg, will receive the 2013 Karl Böer Solar Energy Medal of Merit during a ceremony to be held at 2:30 p.m., Friday, April 26, in Gore Recital Hall of the Roselle Center for the Arts at the University of Delaware in Newark.

The medal and a cash award of $50,000, funded by the Karl W Böer Solar Energy Medal of Merit Trust, is given every two years to an individual who has made significant pioneering contributions to the promotion of solar energy as an alternate source of energy through research, development or economic enterprise or to an individual who has made extraordinarily valuable and enduring contributions to the field of solar energy in other ways.

The award is given in honor of Karl Wolfgang Böer, a longtime University of Delaware faculty member, founder of UD’s Institute of Energy Conversion and a distinguished scientist in the field of solar cells.

George C. Hadjipanayis, executive director of the Karl W. Böer Solar Energy Medal of Merit Trust and the Richard B. Murray Professor of Physics and Astronomy, explained that the award is given to Alferov and Andreev “for their pioneering work in the design of new solar cells and concentrator modules based on III-V semiconductor compounds with superior efficiencies and increased lifetime.”

The recipient of the award is chosen by a panel of commissioners composed of scientists and presidents of several solar energy-related professional societies, a representative from the U.S. Department of Energy, a past recipient of this award, and a member of the Böer family.

Contributions of Alferov and Andreev

The scientific activity of Alferov and Andreev has been focused for more than 40 years on research and development of III-V semiconductor heterostructures – combining group III elements such as aluminum, gallium and indium with group V elements such as nitrogen, phosphorus and arsenic specifically to improve solar cells.

In the late 1960s and early 1970s, they carried out multifaceted investigations in the field of semiconductor device technology and physics, based on heterojunctions, or semiconductor interfaces.

They developed what are considered the ideal aluminum gallium arsenide/gallium arsenide (AlGaAs/GaAs) lattice matched heterojunctions, allowing for the proposal and realization of a number of semiconductor devices, including:

While the majority of solar cells are made from silicon, Alferov and Andreev were ahead of their time in working with the III-V semiconductor compounds, which demonstrated greater performance and opened the door to increased efficiency in solar cells and arrays.

The improvements were put into practice in the 1970s as the new solar cells were used to equip the Soviet Mir space station.

Subsequent years saw further modifications of the solar cells, with the researchers improving the radiation tolerance and increasing the lifetime of space solar cells almost two times over.

Their developments in solar energy systems resulted in wide international cooperation with organizations including the Instituto de Energia Solar in Madrid, the Fraunhofer Institute for Solar Energy Systems in Freiburg, NASA’s Glenn Research Center and the Toyota Technological Institute.

The first Karl W Böer Solar Energy Medal of Merit Award was presented in 1993 to former President Jimmy Carter, who was cited as an individual who spurred development and focused world attention on solar energy.

Other recipients of the Böer Medal include: