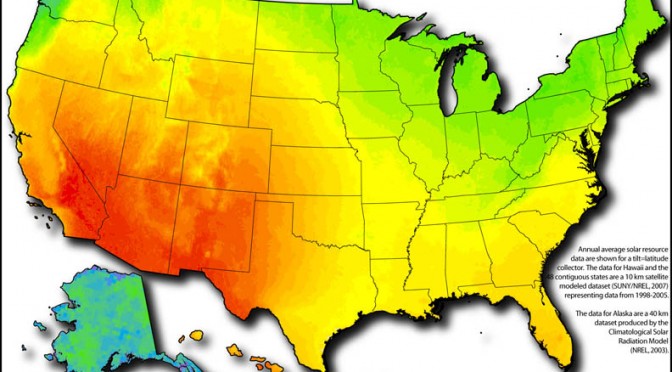 This month a report produced through a collaboration between the WWF, First Solar, 3TIER and Fresh Generation entitled ‘Solar PV Atlas: Solar Power in Harmony with Nature’ has claimed that even if photovoltaic panels were the only source of electricity, they could still meet the entirety of the world’s projected energy demands and would require only 1% of the earth’s land mass to do so.

The report uses case studies taken from work carried out in India, Morocco, South Africa, Turkey, Mexico, Madagascar, and Indonesia and concludes that there is no conflict of interest between conversation efforts and the desire to make increased use of P.V. The authors stress that as long as solar projects are well planned, they do not have to come at the expense of other environmental goals.

The report concedes that the scenario of 100% solar generation is unlikely to happen, giving 30% as a more optimistically realistic target. It goes on to highlight that, this being the case, in all likelihood much less than 1% of our land mass will be needed for solar energy to play its part in a fully renewable energy mix by the middle of the century.

Key to the report’s findings is the argument for P.V.’s potential for ‘co-location’ with existing forms of land use, such as the roofs of buildings and roadsides, where it can deliver significant amounts of power without taking up any extra land. In addition, the report notes that “ground-mounted P.V. systems in areas of high isolation require less land than the coal-fuel cycle coupled with surface mining to produce the same amount of electricity.”

The report assumes that whilst demand for electricity will continue to increase, global energy consumption will fall as fossil fuels and nuclear power are phased out. Whilst some of the report’s assumptions could be labeled overly hopeful (for instance the figures for global per capita energy consumption in 2050 are based on the premise that there will be energy equality across borders) in other regards the numbers presented are conservative. For instance, all calculations are based on P.V. panels working at 15% efficiency. Currently there are panels already in production which offer more than 20% efficiency. Indeed some manufacturers claim to have produced panels offering more than 30% efficiency.

As the WWF point out: “The solar energy that hits the Earth’s surface in one hour is about the same as the amount of energy consumed by all human activities in a year.” If solar panels were to become even 50% more efficient then, naturally, the question of land use and conservation becomes even less of an issue.