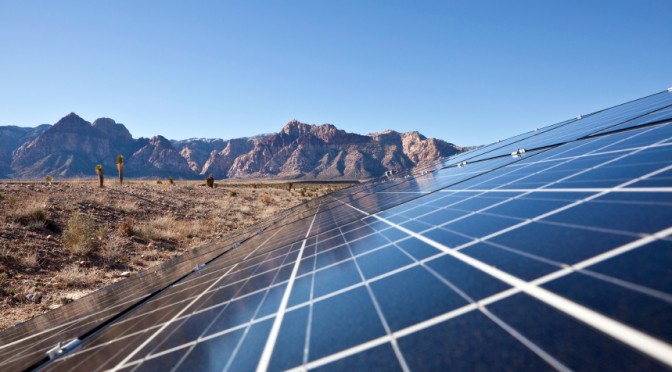 Saudi Arabia has completed its biggest ground-mounted photovoltaic plant as it seeks to generate a third of its electricity with energy from the sun by 2032.

“This project represents an important milestone in the development of the solar industry in the Kingdom of Saudi Arabia,” Ron Shen, Suntech’s vice president of Asia Pacific, Middle East and Africa, said in a separate statement.

Located on the grounds of the King Abdullah Petroleum Studies and Research Center (KAPSARC) in Riyadh, the plant was constructed over a period of 20 months. Owned by Saudi Aramco, Suntech Power Holdings Co., Ltd provided the 12,684 crystalline photovoltaic modules and SMA Solar technology AG supplied the central inverters. The generated energy is fed directly into KAPSARC’s medium voltage grid.

Phoenix Solar AG (ISIN DE000A0BVU93), a leading international photovoltaic system integrator listed in Prime Standard of the Frankfurt Stock Exchange, has successfully taken its flagship project in Saudi Arabia into operation. The ground-mounted photovoltaic plant with a peak power of 3.5 megawatts is located in Riyadh on the premises of KAPSARC (King Abdullah Petroleum Studies and Research Center), home to the world’s largest oil research facility. The solar power plant is part of the US Green Building Council’s LEED Certification (Leadership in Energy and Environmental Design) which KAPSARC aims to achieve. This certification is proof of compliance with the demanding requirements and standards placed on sustainable and green building.

Over the last 20 months, Phoenix Solar has installed more than 12,000 Suntech Power crystalline modules on an area of 55,000 square meters. The German company SMA supplied the central inverters. The expected energy yield amounts to around 5,800 megawatt hours and is fed directly into KAPSARC’s medium voltage grid.

This project in the Saudi Arabian desert presented many challenges, as there is little research available so far on the performance of solar power plants in desert regions. Phoenix has developed a special solution to accommodate the high temperatures and sand storms: the photovoltaic array boxes, which normally stand in the field array, were placed in a well insulated, air-conditioned inverter building. This approach considerably improves the conditions under which the power plant can be maintained as well as prolonging its life cycle. The engineers and technicians of Phoenix Solar have incorporated the demanding requirements based on the Saudi Aramco Standards into the planning, electrical work, air conditioning technology and lighting. Saudi Aramco as the Project Management Consultant was responsible for the whole project on behalf of KAPSARC.

“As a result of the solutions developed here, the KAPSARC photovoltaic power plant which was built according to Saudi Aramco Engineering Standards is currently not only the largest ground-mounted photovoltaic power plant in Saudi Arabia but also of premium quality and customer optimised”, said Klaus Friedl, Vice President Projects and responsible at Phoenix Solar for the Middle East.

“I am proud of what my colleagues have achieved. Everyone involved deserves huge praise!”, said Dr Andreas Hänel, Chief Executive Officer of Phoenix Solar AG. “Only a short while ago it was announced that Saudi Arabia plans to install 41 gigawatts of solar power over the next 20 years. With this top-quality flagship project, we have gained a good footing in the region”, was his pleased comment.

Phoenix Solar AG, which has its headquarters in Sulzemoos near Munich, is a leading international photovoltaic system integrator. The Group develops, plans, builds and operates large-scale photovoltaic plants and is a specialist wholesaler for turnkey power plants, solar modules and accessories. With sales operations throughout Germany and subsidiaries on three continents, the company has sold solar modules with an output of more than one gigawatt since its founding. The shares of Phoenix Solar AG (ISIN DE000A0BVU93) are listed on the official market (Prime Standard) of the Frankfurt Stock Exchange.