Wind energy is expanding across Europe – currently the continent has over 100 GW of wind energy capacity with levels set to rise as the EU continues on its path to a 20% share of renewable energy by 2020, but the expansion in the number of skilled workers the sector requires is not keeping up.

TPWind – wind energy’s research and development platform – is set to release new statistics at the European Wind Energy Association’s  2013 Annual Event in Vienna early February revealing just how deep the skills shortage runs today, and is likely to run in the future.

Engineers are in short supply, especially in operations and maintenance, the statistics will show.

“The lack of human resources in wind energy is one of the major bottlenecks of the future,” Filippo Gagliardi, TPWind Secretary General, said. “Later on this year TPWind will produce a major report detailing the currently available training programmes across Europe, and recommendations to expand this in order to fill the growing skills shortage,” Gagliardi added. 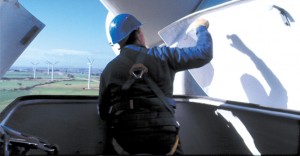 The skills shortage has been widely known in the wind energy sector for a number of years: back in 2009, EWEA’s report ‘Wind at Work’ found an “acute shortage” of engineers and site managers.

If you are interested in working in wind, then why not attend the careers day at EWEA 2013 in Vienna on Thursday 7 February? “This event is aimed at identifying the ‘most wanted’ profiles in wind energy, and matching the right people to the right jobs,” Gagliardi said.