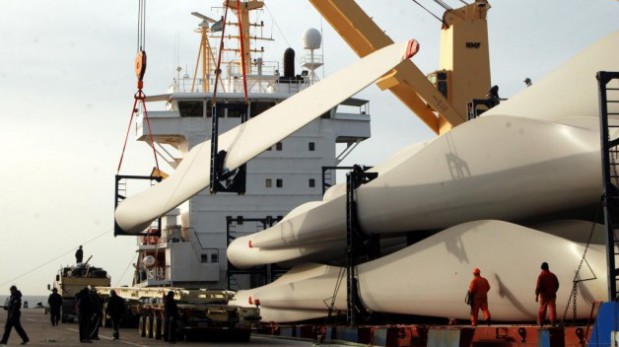 The wind energy industry is continuing to expand worldwide with the industry ebbing and flowing as global governments decide policy on supporting renewable power and then reconsider the economics, causing delays in financing major projects.

The industry is caught in the financial tide but is growing with offshore and new countries coming into the marketplace.

The US wind energy industry will be helped by the renewal of the Production Tax Credit in 2013. The manufacturers of wind turbines are constantly looking at new regions and types of turbine to keep their market share.

In terms of the wind blades, the industry not only supplies blades for new turbines, but also to upgrade and provide replacements for established generators. This means setting up composite construction facilities worldwide to ease the transport logistics of large blades so ports are the most popular locations.

Thus in the UK the ports are competing to win new blade business to supply the planned offshore wind farms – the UK is expected to be the global leader in wind farms at sea. Some turbine makers build all of their own components, whereas others commission construction from other firms.

REPower does a combination of the two and has taken on Dr Jan Kranich, a leading economist, as Global Commodity Manager for Composites to determine the best place to manufacture blades and the best way to source them for international business, considering factors such as location of the industry, transportation and labour costs.

LM Wind Power has retained its place as top independent blade manufacturer in the world although it has not been immune to the economic situation.

The latest concept from the company is to offer a flexible blade platform (GloBlade) where a set of variations can be built in to tailor a blade design for each customer, with different blade lengths for different powers.

One of the growing turbine manufacturers is Siemens Wind Power, which has its own distinct method of manufacturing blades. The company studies all aspects of design in detail including aerodynamics, which have become more important with the rise in size – a 3.5 MW turbine rotor is now bigger than a Boeing 747. The driver for size is to maximise annual energy production and a 10% increase in rotor area approximates to 12% more energy. However, other factors come into play like the potential for more noise and the rise in weight. Design improvements have been tremendous over the 30 years of wind blades: the original Bonus 5m blade, for example, was more shaped like a rowing oar, whereas the latest Siemens blade is tapered, with reduced solidity (from around 10% to 5%) and trailing edge add-ons for noise reduction. The technology of passive twist bend is showing great promise.

The leading research group for wind blades in the United States is Sandia National Laboratories. One of the latest projects involved scaling up a theoretical blade design, SNL100-00, to 100 metres, the longest model in the world, and are now starting to look at some of the challenges like weight and the need to meet the certification standards such as GL and IEC.

One of the big issues for wind energy in cold climates is the level of ice that can build up on blades and prevent the rotor from turning. Various solutions have been proposed and there is a large market for energy production if the problem can be resolved. The Nordex system is pro-active with continuous monitoring of icing conditions, and using minimal energy from the turbine while it is operational to heat the aerodynamically relevant blade surfaces. In tests the anti-icing turbine generated considerably more energy during the winter months than a reference turbine.

Climate has been known to cause erosion since the world began and this process can also occur on wind blades particularly on the leading edge. 3M has looked at this problem, which is observed irrespective of hub height, location, blade length or manufacturer. Key factors are tip speed, the quality of blade finishing and the environmental conditions. The erosion usually starts in the area of the blade tip with damage to paint or coating and can affect energy output by altering the aerodynamics (up to 20%). 3M has several protective products for blades including a film-based tape based on 40 years of experience in aerospace applications like helicopter blades, and a new protection coating W4600, which is VOC free, fast curing and re-coatable.

This new PU-based material has been studied for liquid/rain erosion using current methods like pulsating jet erosion testing – this is an area of Standards that is under review. Lightning strikes tall objects and wind turbines fall into that category, so protection is essential. For an average turbine tip at 160m, even in low lightning risk areas like the North Sea there will be 1.4 flashes per year. The current blade lightning protection technology incorporates a set of receptors which attract lightning in a storm. The world’s longest manufactured prototype blade was sent for testing by SSP Technology at the end of 2012. The 83.5m structure was made for Samsung, which has expertise in carbon fibre in helicopter blades and expects high quality standards. The use of carbon fibre in the spar cap was discussed with lightning protection experts and the leading edge was tested for rain erosion and protected with a combination of tape and paint as the tip speed is increased.

As the wind energy industry continues to adapt to the varying weather conditions worldwide and to build larger and larger turbines, so the rotor is being upgraded too. The next advanced forum by AMI will take place in December 2013 in Dusseldorf.