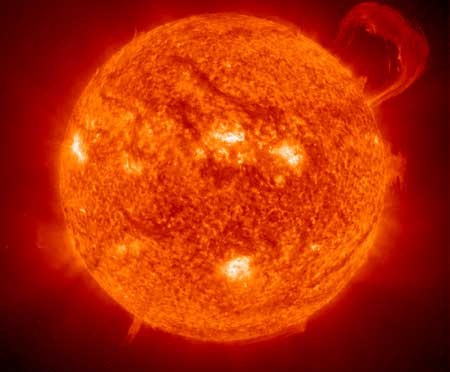 A NASA suborbital telescope has given scientists the first clear evidence of energy transfer from the sun’s magnetic field to the solar atmosphere or corona. This process, known as solar braiding, has been theorized by researchers, but remained unobserved until now.

Researchers were able to witness this phenomenon in the highest resolution images ever taken of the solar corona. These images were obtained by the agency’s High Resolution Coronal Imager (Hi-C) telescope, which was launched from the White Sands Missile Range in New Mexico in July 2012.

“Scientists have tried for decades to understand how the sun’s dynamic atmosphere is heated to millions of degrees,” said Hi-C principal investigator Jonathan Cirtain, a heliophysicist at NASA’s Marshall Space Flight Center in Huntsville, Ala. “Because of the level of solar activity, we were able to clearly focus on an active sunspot, and obtain some remarkable images. Seeing this for the first time is a major advance in understanding how our sun continuously generates the vast amount of energy needed to heat its atmosphere.”

The telescope, the centerpiece of a payload weighing 464 pounds and measuring 10-feet long, flew for about 10 minutes and captured 165 images of a large, active region in the sun’s corona. The telescope acquired data for five minutes, taking one image every five seconds. Initial image sequences demonstrated the evolution of the magnetic field and showed the repeated release of energy through activity seen on the sun at temperatures of 2 million to 4 million degrees.

Many of the stars in the universe have magnetic fields. The evolution of these fields is used to explain the emission of the star and any events like flares. Understanding how the magnetic field of the sun heats the solar atmosphere helps explain how all magnetized stars evolve.

These observations ultimately will lead to better predictions for space weather because the evolution of the magnetic field in the solar atmosphere drives all solar eruptions. These eruptions can reach Earth’s atmosphere and affect operations of Earth-orbiting communication and navigation satellites.

The images were made possible by a set of innovations on Hi-C’s optics array. The telescope’s mirrors were approximately 9 1/2 inches across. New techniques for grinding the optics and polishing the surfaces were developed for the mirrors. Scientists and engineers worked to complete alignment of the mirrors, maintaining optic spacing to within a few ten-thousandths of an inch.

“The Hi-C observations are part of a technology demonstration that will enable a future generation of telescopes to solve the fundamental questions concerning the heating of the solar atmosphere and the origins of space weather,” said Jeffrey Newmark, sounding rocket program scientist at NASA Headquarters in Washington.