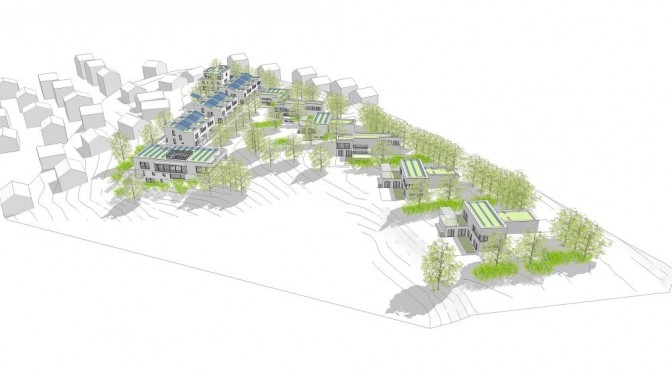 KACO new energy GmbH, one of the world’s largest manufacturers of photovoltaic inverters, has for the first time developed a complete energy management concept for a local storage project.

Since August 2012, a model development has been under way in the town of Weinsberg (Germany), whose electricity and heat supply will come almost exclusively from solar energy.

The “Quartierspeicher Weinsberg” (Weinsberg local storage) will be supplied with electricity by photovoltaic systems with a total installed capacity of 150.12 kW.

The intermediate storage for the solar power will be provided by a central 150 kWh lithium-ion battery. For charging and discharging the battery, KACO new energy has developed a new bidirectional inverter with a capacity of 120 kW that features fast reaction times and a high efficiency.

A central buffer tank of approx. 20,000 litres is planned for thermal storage of the solar energy. This will be connected to a local heating network, together with a combined heat and power plant and a heat pump. In addition, each building will have its own daily storage. In order to source the maximum electricity and heat supply from solar energy and to optimally align these with each other, KACO new energy will be taking control of all thermal components in addition to the electrical energy management. This will include monitoring that records all energy flows in the development. This data will be used to optimise the existing system.

“By implementing the complete energy management concept for a local storage, KACO new energy are proving that we are not standing still as a component manufacturer, but can also put in place highly integrated, complex systems for our customers,” CEO Ralf Hofmann said of the significance of the project for the company.

The model development will also help to investigate how local-area residential storage can relieve and support the mains electricity grid. KACO new energy will therefore be working with network operators to define requirements for the future structure of the grid and to develop control parameters. The flagship project in Weinsberg provides the blueprint for a stand-alone solar energy supply, which could be used by other large consumers, such as hotels and industrial operations.

Construction of the “Steinbruchweg” development began in August 2012. 23 units comprising six single-family houses, one house with an attached flat, ten townhouses and one apartment house with five units are being built on an area of 16,000 m². Completion is scheduled for the end of 2013. The development is being delivered by Kruck + Partner Wohnbau und Projektentwicklung GmbH und Co. KG from Heilbronn. The modules for the photovoltaic system come from Yingli Green Energy. 270 W smart modules are being used from the Yingli Solar PANDA series, equipped with optimiser technology from Tigo Energy.

KACO new energy is one of the world’s largest manufacturers of grid-tie inverters for feeding solar energy. The company offers a comprehensive range of inverters for PV systems for everything from single-family homes to multi-megawatt solar farms. KACO new energy is based in Neckarsulm, Germany and has been producing inverters with a cumulative capacity of nearly six gigawatts since 1999. KACO new energy was the first company in the photovoltaic industry to manufacture inverters (the Powador model) using CO2-neutral production methods. In addition to grid-tie and battery-based solar inverters, the company also supplies inverters for combined heat and power plants and concentrator modules as well as energy storage systems for solar power plants.