Freezing temperatures in both Belgium and Germany have put both countries’ power systems to the test this week, but neither country has experienced electricity blackouts despite the lack of nuclear power.

Two of Belgium’s seven nuclear reactors – Doel 3 and Tihange 2 – were switched off this summer, following the discovery of cracks, cutting 2,000 MW of electricity-generating capacity from Belgium’s electricity network. Even without this nuclear capacity online, the network survived this winter’s peak electricity demand of 13,166 MW on 17 January, L’Echo, a Belgian newspaper, reported.

Belgium’s electricity supply is guaranteed by a small amount of energy imports – including gas from the Netherlands and solar and wind from Germany – and a diverse energy portfolio, one in which renewable energy has a rising share, the paper said.

Similar news emerged from Germany: Reuters reported that the country’s electricity supply is adequate this winter, despite the nuclear switch off which started in 2011 following the Fukushima nuclear accident.

Meanwhile, Greenpeace Germany has reported that more than half of the coal-power projects planned in 2006 have since been abandoned thanks to Germany’s energy policies which have seen a shift to renewable energy.

An article in French daily Le Monde noted that not only is coal one of the most polluting sources of energy, in particular lignite – of which there is plenty in Germany – but coal is facing economic problems.

Coal-fired electricity plants are the oldest in Germany’s electricity portfolio and they cannot provide power on a flexible basis – it takes a long time to put out a coal fire.

Le Monde reported that the rising share of renewables in Germany’s energy mix requires more flexibility – when the sun shines and the wind blows more electricity is produced than needed meaning that renewable electricity is available at prices that threaten the profitability of coal. 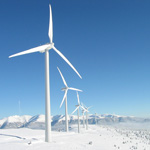 A lignite coal-powered station coming online in 2015 will make an overall loss over its 40 year lifetime, according to Christian von Hirsch-hausen, Research Director at the German Institute for economic research (DIW).  In a system with a rising share of renewables, lignite does not have any economic benefits, he added.