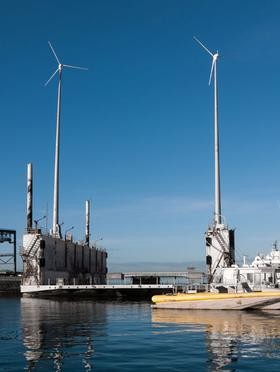 Navatek Ltd. said last week that it has installed two Renewegy VP-20 wind turbines at its Pier 41 site in Honolulu to reduce its energy consumption and production costs.

The $500,000, 40-kilowatt project, which became operational just a few days ago, is expected to cut the Honolulu-based high-technology company’s $45,000 annual electric bill in half.

Last May, Navatek won a $250,000 grant under the federal government’s competitive Small Shipyard Grant Program and added $250,000 of its own money to acquire and install the wind turbines at the site it shares with its sister company, Pacific Shipyards International.

As part of the overall project, Navatek has installed a plasma actuation system it created, which has the potential to increase the power production of a wind turbine by as much as 25 percent.

Company officials say that the patent-pending system is small, has no moving parts and can be either built into the blades during manufacturing or retrofitted on existing turbines. Navatek has secured nearly $800,000 in federal funding from the Office of Naval Research to test the new technology.

“If the demonstration goes well, the project may secure additional funding,” Navatek President and CEO Martin Kao said in a statement. “We will target both the commercial and military markets [and] the Defense Department is a huge energy consumer, and all the armed services are committed to diversifying their energy sources and reducing their carbon footprint.“

Founded in 1979, Navatek has about 50 employees and $17 million in annual sales. It focuses on fluid dynamic simulation and modeling and the design/construction of advanced ships and boats.