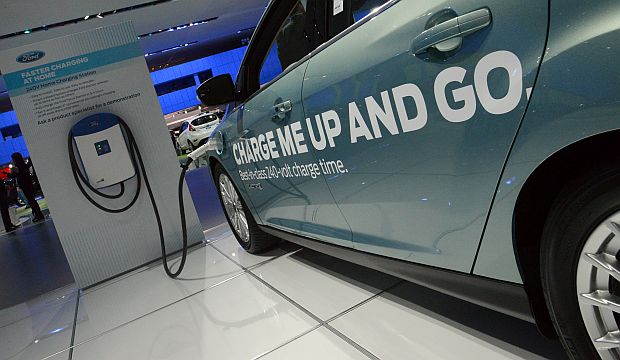 Auto makers are doing more than imagining, and the technology is widely displayed at this year’s North American International Auto Show, which opened to the public Saturday and runs through Jan. 27.

At Ford, Honda, Toyota, Chevrolet and others’ displays this year, people can see how the technology works, including trying out pumps that look like gas pumps but plug into vehicles. The technology is transforming how all vehicles are powered, creating jobs, benefiting the environment and spreading quickly.

The first plug-in cars went on sale in November 2010. A sure sign that electric vehicles are taking hold? There’s a variety now seen in the marketplace.

“We’re in the middle of a very successful roll out. What’s most gratifying is watching the emergence these past two years, the variety of models at a greater variety of price points,” said Brian Wynne, president of Electric Drive Transportation Association. “That’s what we want. That’s what consumers want; they are drawn to different vehicles for a variety of reasons, and that’s what we’re seeing now.”

But that 2012 total number still accounted for only 3.38 percent of the total market share, more than 14.4 million vehicles sold in the United States last year, according to the Electric Drive Transportation Association.

Nissan, Tesla, General Motors, Fiat, BMW, Honda and Ford all have electric vehicles, among others.

The prices are no longer astronomical, but the technology is spreading into luxury vehicles, offering consumers choice and a number of price points. For example, the Chevrolet Spark electric vehicle is about $25,000, before a $7,500 federal tax credit, which is about twice what a gas-engine Spark would cost. At the auto show, Nissan announced it was dropping the price of its Leaf by $6,400 to just under $28,000. With federal and state tax credits, the Leaf could be purchased for just under $19,000.

Honda’s Accord plug-in hybrid sells for nearly $40,000 before the credit. The Accord gets 46 miles to the gallon. The car, on display in Detroit now, can be purchased in California and New York now and will be available to the rest of the country by the fall.

Even cars with conventional engines are borrowing from electric driving technology, Wynne said, because it helps with efficiency and smooths the ride. Cars are also available as hybrids, hybrids with plug-in charging, extended-range electric, battery and fuel cell technology.

While plug-in technology seems foreign in West Central Ohio, it is more and more common at homes, workplaces and charging stations in places such as municipal buildings, stores and hotels on the coasts. California, Oregon and the Washington, D.C., area are particular hot spots.

“We used to wave at each other, it was so rare to see someone else driving this kind of car,” Wynne said. “That’s not true anymore … The important thing to recognize is that for drivers it’s different to plug a car in. Most people are going reasonable miles in a fairly predictable way. The industry is trying to understand how people drive, and build the infrastructure around that.”

The technology, including how far a car can travel, is getting better and better. This past week, Ford announced its new Fusion Energi hybrid plug-in can travel a total range of up to 620 miles with a tank of gas and a full charge and has the ability to drive up to 21 miles in electric-only mode.

At the beginning of January, Honda of America Mfg. announced it will invest $23 million and hire 50 new employees for its Marysville Auto Plant to add production of its new Accord Hybrid. In addition to manufacturing, Ohio is the center for vehicle engineering in North America. At its expansive R&D center in Raymond, Ohio, Honda’s largest R&D center outside Japan, more than 1,300 associates are engaged in “complete product creation” of all-new products for Honda and Acura customers.

“From 2011 to 2012 we saw a 198 percent increase in sales of plug-in vehicles. That has less to do with demand than it did with the supply chain,” Wynne said. “As that improves, the cars will get into more and more markets. Using less gasoline is a national imperative. We need to lead the world in this technology. And, people love driving these cars. You get in, step on the accelerator and have instant torque and no noise. They get what I call the EV smile.”