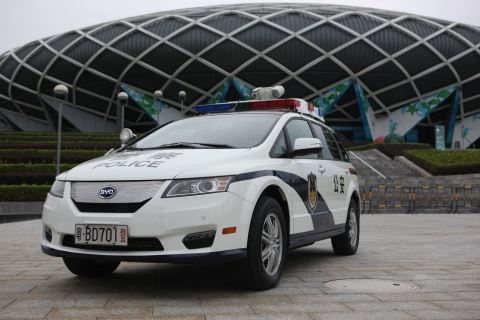 BYD Co. Ltd. says the Shenzhen Municipal Public Security Bureau has taken delivery of 500 of BYD’s e6 electric vehicles. The BYD e6 reaches speeds of over 85 mph with a range of more than 185 miles.

After being selected through a public bidding process, BYD has delivered 500 pure-electric, e6 police vehicles to the Shenzhen Municipal Public Security Bureau this week, another breakthrough in BYD’s promotion of electric vehicles into new applications.

The BYD e6reaches speeds of over 140 km/hr (~87 mph) with a range of 300 km (187 miles), making it ideally suited for the demands of police utility vehicles. The virtually silent engine of the BYD e6 is beneficial to police as they perform daily patrols and law enforcement activities in Shenzhen, and with no direct emissions, the e6 reduces total CO2 emissions, improving the city environment.

BYD Co., Ltd is a leading-edge provider of green energy technologies that specializes in the IT, automotive and new energy industries. Being the world’s biggest rechargeable battery manufacturer, BYD also has the largest global market share for cell-phone chargers and keypads. BYD branched out into the auto business in 2003, and has kept a robust yearly growth rate successively. In 2008, Warren Buffett invested $232 million to take a 9.89% stake in BYD. Today, BYD is the fastest-growing Chinese auto company and a global pioneer in the field of new energy vehicles including Dual Mode Electric Models and Pure Electric Models.

Based on its core Fe Battery technology, BYD has worked out a Green City Solution, which aims to electrify urban public transportation systems by transitioning from gasoline and diesel buses and taxis to pure electric ones. In March 2012, BYD and Daimler AG officially announced the entirely new EV brand Denza in China.