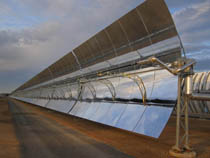 Solar energy is abundant in Qatar. All that untapped solar power could create a new energy economy in this oil-rich nation.

Researcher Nesrin Ozalp slides on a pair of big, black, UV resistant sunglasses and enters her lab in the research facility at Texas A&M University in Qatar’s capital city Doha. In the center of the room bright rays of light beam from what looks like a baking over. It’s Ozalp’s solar simulator.

“It generates high-temperature radiation that is exactly like the solar energy, which we need for our experiments,” she told DW.

Ozalp is an associate professor with the university’s mechanical engineering program. She is developing a reactor to utilize solar power. But this system isn’t intended as a power source for machines. She uses the concentrated solar energy to break down natural gas into its two components: carbon and hydrogen.

Natural gas is an extremely valuable commodity that can be burned to heat homes or fuel cars. So it may seem odd that Ozalp is destroying it. But, she explains, on the global markets for chemicals, hydrogen and carbon are in high demand.

“Carbon is one of the most commonly used commodities in the industry,” Ozalp says.

Carbon can be produced without solar energy, but the process is quite dirty. Mineral oil is partially combusted at very high temperatures. The result is not only carbon, but also a series of harmful byproducts like carbon monoxide, nitrogen oxides, and sulfur compounds.

The production of hydrogen is also harmful to the environment. Most hydrogen is made by reacting steam with coal or natural gas, which are not renewable resources. The byproduct here in CO2.

Nesrin Ozalp’s research is focussing on how to make the process cleaner. “We take natural gas and we use concentrated solar energy to directly breakt it down into its components. There is no other byproduct,” she says.

Natural gas flows into a metal box – the reactor – which has a single pane of glass. The solar beam, or concentrated natural light, enters the reactor through the glass and heats it up.

As a result, natural gas is split into carbon and hydrogen which are blown out of the reactor. The solid carbon can be filtered out of the hydrogen flow. Natural gas is still used at this point, but Ozalp explains that this is just a temporary solution until researchers come up with an even greener process.

“It is much more reasonable to move from a fossil fuel economy to a renewable energy economy one step at a time,” she explains. “It is like a child trying to crawl first before taking its first step.”

The state of Qatar seems to take a more ambitious view. Plans for a huge polysilicon production factory are already underway. The plant is intended to fill an expected spike in demand for silica for solar panels in the future. One way the panels will be used is to power air conditioning systems when the Gulf state hosts the Football World Cup in 2022. The plan is that all stadiums will be equipped with new solar systems.

There is also research underway on solar-powered water desalination plants. Nadia Amar Aboul Hosn of the Qatar Sustainability Network told DW that Qatar has almost no fresh water and is completely dependent on the desalination of sea water. It’s a process that uses a lot of energy.

Using a process called reverse osmosis, large pumps press sea water through very fine pores, so that the salt stays behind. The pumps are energy intensive and it can be expensive to power them. At the moment, most machinery relies on fossil fuel. But Aboul Hosn says the sun may offer an endless supply of energy for water desalination.

“The Qatar Environmental and Energy Research Institute is undertaking a pilot project for solar energy desalination, where we generate electricity with solar energy and at the same time do solar desalination,” Aboul Hosn told DW. “In a few years, when this technology is truly developed, it will save Qatar 75 percent of the energy used in desalination.”

However, like so many plans concerning renewables in Qatar, solar air conditioning and solar desalination are still in the early stages of development. There are some serious challenges ahead. The sunny Gulf state seems to be the perfect place to install solar panels. But solar panels tend to malfunction in high temperatures and the dusty conditions may cause problems as well. But with investment increasing, the researchers remain hopeful.