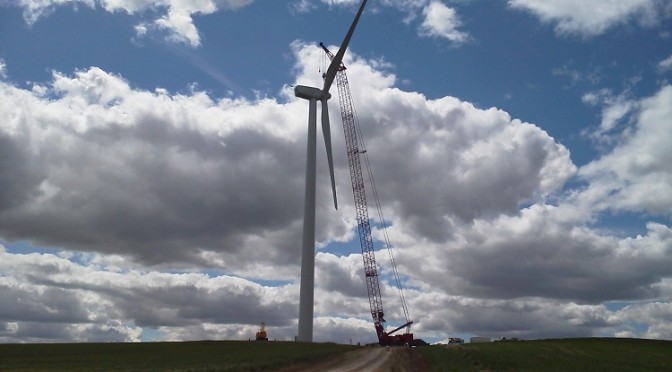 “We are very pleased to complete construction of Auwahi Wind both on time and on budget,” said Jeffrey W. Martin, president and CEO of Sempra U.S. Gas & Power. “The addition of new, clean energy from our project will be a boost for Maui’s infrastructure and will help Hawaii achieve its goal of securing 40 percent of its energy from renewable sources by 2030. This project could not have been built without the enthusiastic support of the local community, the Ulupalakua Ranch and neighbors who recognize the importance of sustainable energy.”

The power from Auwahi Wind has been sold to Maui Electric Company (MECO) under a 20-year contract. The turbines will generate enough clean electricity to power about 10,000 typical Maui homes. An important component of the project is a 10 MW battery capable of storing 4.4 megawatt-hours of power. Energy from the battery will help regulate and sustain power to the MECO grid during light wind conditions.

“Innovation is a big part of what Sempra U.S. Gas & Power brings to all of our projects,” Martin said. “The battery storage component of Auwahi Wind includes state-of-the-art monitoring and safety controls which will help maximize the benefit that the Maui Electric Company and its customers receive from this project.”

Construction of the wind farm on Ulupalakua Ranch began in March 2012, and involved more than 180 workers. Auwahi Wind will employ four full-time employees.

“It was just seven months ago that the groundbreaking for Auwahi Wind was held and today we’re celebrating its completion,” said Hawaii Lt. Gov. Brian Schatz. “What a great way to end a banner year for wind energy in Hawaii. This project is an important step toward energy self-sufficiency and has the added benefit of helping Ulupalakua remain financially viable and preserve a ranching lifestyle on Maui and protect open space and habitat for native plants and animals. It’s not every day that we celebrate a success like this so it gives me great pleasure to congratulate Sempra, BP Wind, Ulupalakua Ranch and MECO for their commitment to seeing this project through to completion.”

“Today marks an important step for the state of Hawaii as it increases its energy independence,” said John Graham, president & CEO of BP Wind Energy. “Wind power is a key component of delivering a diverse and adequate energy supply and BP is proud to have partnered with Sempra U.S. Gas & Power to make the Auwahi Wind Farm project a reality.”

“BP and Sempra U.S. Gas & Power have been terrific partners,” said Sumner Erdman, president of Ulupalakua Ranch. “The Auwahi project protects the environment, maximizes wind as a renewable energy resource and allows us to maintain the rural open space and grazing areas necessary for us to raise our cattle.”

About BP BP has invested more in the United States over the last five years than any other oil and gas company. With more than $52 billion in capital spending between 2007 and 2011, BP invests more in the U.S. than in any other country. The company is the second largest producer of oil and gas in the U.S., a major oil refiner and a leader in alternative energy sources including wind power and biofuels. BP provides enough energy each year to light the entire country. With 23,000 U.S. employees, BP supports nearly a quarter of a million domestic jobs through its business activities. For more information, visit www.bp.com.Since 2005, BP Alternative Energy has invested around $8 billion in alternative energy development, with more than $4 billion invested the U.S. BP Wind Energy is a principal owner and operator of wind power facilities in the U.S. with interests in 16 wind farms across nine states. BP Wind Energy has a gross generating capacity of nearly 2,000 MW – enough electricity to power approximately 600,000 average American homes. For more information, visit the company’s Web site at www.bpalternativenergy.com
Sempra U.S. Gas & Power, LLC is a leading developer of renewable energy and natural gas solutions. The company operates solar, wind and natural gas power plants that generate enough electricity for nearly 1 million homes, along with natural gas storage and pipelines, and distribution utilities. Sempra U.S. Gas & Power is a subsidiary of Sempra Energy (NYSE: SRE), a Fortune 500 energy services holding company with 2011 revenues of $10 billion. The Sempra Energy companies’ nearly 17,500 employees serve about 31 million consumers worldwide. For more information, visit www.SempraUSGP.com.