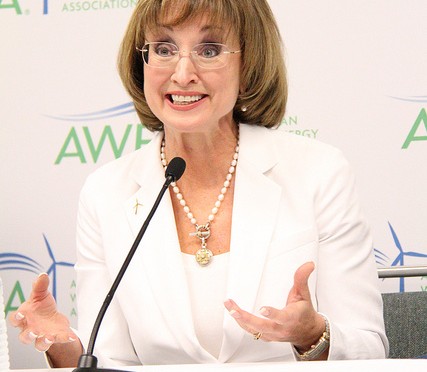 Denise Bode, CEO of the American Wind Energy Association, announced today that she is resigning, effective January 1, to return to private practice as a tax attorney.

“There is now a strong, bipartisan team of Congressional champions for the wind industry, and the all-important extension of the Production Tax Credit (PTC),” Bode said. “When that is secured, all of my goals from the AWEA Board will have been accomplished. I am extremely proud to have led the AWEA staff as we worked together to get that job done, and, of course, grateful to the AWEA Board for the opportunity to serve this very promising industry.”

Tom Carnahan, chairman of the Board of Directors, said, “We are grateful to Denise for her countless contributions to the wind industry as the Association has undergone a successful transformation to a first-class bipartisan business trade association. She has been a critically important agent for change and growth at AWEA, and she will be sorely missed. We wish her continuing success.”

“I will be working with AWEA’s Board to appoint a search committee to recruit a new leader for the organization who will work closely with AWEA’s excellent staff to build on Denise’s legacy,” Carnahan said. “In the meantime, Senior Vice President for Public Policy Rob Gramlich has agreed to serve as interim CEO through the transition period. Gramlich, a well-known electric industry expert, has been at the center of AWEA’s external relationships and internal strategic planning for over seven years, and will be able to keep AWEA’s initiatives moving forward without missing a beat. We thank him for his willingness to serve.”

Carnahan also said he was pleased that Bode has agreed to be available to the AWEA leadership for her additional guidance in the future.

During Bode’s four-year tenure at AWEA, the Board charged her with reorganizing and upgrading the professional staff to build a team with strong accountability and professionalism; and with assuring that the wind industry had a seat at the policy table, for which she added advocacy campaign tools and expanded media relations. She worked with the Board to institute best practices for association governing bodies and procedures, and sponsored the creation of the Wind Energy Foundation to expand the industry’s public educational outreach. With extension of the PTC, all of her goals for the organization will have been accomplished.

“I am also proud of the opportunity to have been part of the one of the largest growth periods in the wind industry’s history—doubling capacity and increasing American manufacturing to now almost 70% made in America,” Bode said.

She added, “I am excited to be returning to private practice. With tax policy the dominant interest of my career and prospects for a real tax reform bill in the air, I can’t imagine a better time to make this move.”

Bode took the helm at AWEA on Jan. 1, 2009. She previously led the American Clean Skies Foundation, and before that the Independent Petroleum Association of America. For ten years she served as an elected Corporation Commissioner of Oklahoma, and worked for six years on the staff of then-U.S. Sen. David Boren as his legal counsel,

Gramlich joined AWEA in 2005 and oversees its federal, state, regulatory, and data and analysis teams. He previously worked as Economic Advisor to Pat Wood III, Chairman of the Federal Energy Regulatory Commission from 2001 until 2005. He holds a Masters in Public Policy from the University of California at Berkeley and a B.A. in Economics from Colby College.

“Rob Gramlich will provide the steady hand needed to represent the industry during this critical period,” said Bode. “I am confident that AWEA will continue to fulfill its mission of driving demand for wind energy in America.”