Electrical power generation from wind energy last year prevented as much global warming pollution as taking 13 million cars off the road, says a new widely-quoted report published in the US.

The report — Wind Power for a Cleaner America: Reducing Global Warming Pollution, Cutting Air Pollution and Saving Water — adds that wind power saved the equivalent amount of 26 billion gallons of water, more than enough to meet the annual domestic use needs of a city the size of Boston.

“Coal- and natural gas-fired power plants pollute our air, are major contributors to global warming, and consume vast amounts of water — harming our rivers and lakes and leaving less water for other uses,” the report says.

“Wind energy has none of these problems. It produces no air pollution, makes no contribution to global warming, and uses no water.”

The report says the US has more than doubled its use of wind power since 2008 and the nation is beginning to reap environmental rewards as a result of that growth.

The US has abundant wind energy potential, the report adds.

“The U.S. Department of Energy estimates that 20% of the nation’s electricity could be supplied by wind power in 2030, up from 3% in 2011. To achieve that level of generation, construction of new generating capacity would need to continue at levels comparable to that of recent years.”

It says there is still plenty of room for growth in the US wind energy sector but the pending expiration of the production tax credit (PTC), which is the industry’s main incentive, threatens the future expansion of wind power.

In order to protect the environment, the report urges federal and state governments to continue and expand policies that support wind energy.

Losing the PTC, which is set to expire at the end of 2012 unless extended by federal politicians, could cause new wind-power construction to drop by 75%, the report says, and allow global warming pollution and water consumption to continue unabated.

“Combustion of coal and natural gas exacerbates global warming, the? effects of which are already being felt across the nation,” it says. 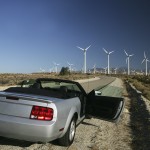 “The average annual temperature in the U.S. has already risen 2° F in the past 50 years, and the number of heat waves has increased. Extreme rain and snowfall events have become 30% more common. Sea level has risen eight inches or more along parts of our coasts.”

The report says the US should continue and expand its commitment to wind power and other renewable energies as they help both the environment and the economy.

Failing to extend the PTC beyond 2012, it said, could result in the loss of $10 billion in investment and 37,000 jobs in 2013, according to an analysis by Navigant Consulting for the American Wind Energy Association (AWEA).