This will be the company’s third production plant, joining its headquarters in Kansas City and a plant in New York City.

Mayor Rahm Emanuel and Smith Electric Vehicles announced today that Smith will open an electric vehicle manufacturing facility in Chicago, creating hundreds of direct and indirect jobs and boosting the already rapidly growing battery and electric vehicle sector in the City. Smith’s decision to locate a facility in Chicago is influenced by the Mayor’s innovative voucher system created to accelerate the conversion from diesel to zero-emission, all-electric commercial vehicles, the large number of fleets interested in vehicle electrification, and the development incentives made available to Smith.

“I’m proud to welcome another growing company with a great mission to Chicago. Soon hundreds of Chicagoans will be able to put their skills to use providing businesses worldwide with high-quality, zero-emission, American-made vehicles,” said Mayor Emanuel. “Smith Electric Vehicles is an innovative company in a forward-looking, essential industry that is a central part of Chicago’s economic future.”

Smith is one of the world’s leading manufacturers of all-electric commercial vehicles, which are zero-emission and less expensive to own and operate when compared with traditional diesel trucks. The company produces trucks for multiple industries, including food & beverage, utility, telecommunications, retail, grocery, parcel and postal delivery, school transportation, military and government. Smith’s customers include many of the world’s largest fleet operators, including PepsiCo’s Frito-Lay division, FedEx, Staples, TNT, Sainsbury’s, Coca-Cola, DHL, and the U.S. Military.

Chicago will be Smith’s third location in the United States, joining their headquarters in Kansas City, Mo., and a manufacturing facility in New York City.

Additionally, the Chicago Department of Transportation (CDOT), under the Mayor’s leadership, has announced a comprehensive, $15 million incentive program that will encourage companies and individuals to modernize their fleets and convert to electric vehicles. The first of its kind in the US, this plan rewards fleets on an increasing scale for replacing their most diesel-consuming vehicles. The program’s initial $15M is funded by resources from the federal Congestion Mitigation Air Quality (CMAQ) program and will provide vouchers to assist companies in reducing the costs of converting their vehicles to electric. The City is also considering additional incentives such as preferential loading zones and decreased registration costs to complement the voucher program. Fleets can stack the State of Illinois’ Alternative Fuel Vehicle and EV Charging Station Rebates on top of the City’s incentive. Through similar federally funded incentive programs, the City has helped deploy 404 cleaner vehicles, including 159 compressed natural gas (CNG) livery/taxi vehicles and 223 alternative fuel stations, including 17 CNG and 202 electric vehicle charging stations – the densest network of any major city. These vehicles and stations have displaced 200,000 barrels of oil and reduced greenhouse gas emissions by 2,850 tons. 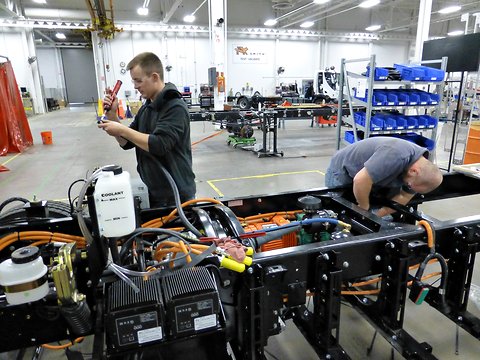 Inside the Smith Electric Vehicles plant in Kansas City, Mo.

“A mass urban deployment of commercial electric vehicles is an important next step in catalyzing mainstream adoption,” said Smith CEO Bryan Hansel. “Chicago’s location, commitment to adoption in municipal fleets, concentration of commercial vehicles, talented workforce and importance to the global business community make it a perfect choice to grow our company and this industry. The leadership being shown with the mayor’s CDOT voucher program is a prime example of how Chicago is creating the template for a new energy city.”

In addition to the announcement of the manufacturing facility, Smith provided an update today on two of its global fleet customers. FedEx Express has initiated the deployment of 100 Smith vehicles in the U.S., Europe and Asia, adding to the electric vehicles already in service throughout the company’s global fleet.

“FedEx continually works toward goals to increase fuel efficiency and reduce emissions of its global vehicle fleet in big and small ways. FedEx Express has deployed more than 100 electric vehicles in its global fleet” said Dennis Beal, Vice President of Global Vehicles at FedEx Express. “Electric vehicles are conducive to operate on routes in urban environments like Chicago, where FedEx introduced the first all-electric parcel delivery trucks in the United States in 2010.”

Coca-Cola’s pilot deployment of Smith Electric Vehicles has been successful. The Company plans to deploy additional electric vehicles in 2013.

Smith Electric Vehicles is currently considering locations for its manufacturing facility in conjunction with City officials. The company expects to begin hiring efforts immediately and announce this new location when the incentive and development packages tied to the site are complete.