This week Renault is inaugurating 40 hectares of photovoltaic panels simultaneously at six of its French production sites. The initiative further confirms Renault’s environmental commitment and is also an innovative way of protecting new vehicles before they leave plants.
Renault this week is inaugurating 400,000 square meters (equal to 60 soccer pitches) of photovoltaic panels, making the system the world’s largest in the automotive industry. The panels are located at six covered, ISO 14001-certified sites – Douai, Maubeuge, Flins, Batilly, Sandouville and Cléon – in delivery and shipping centers and employee parking areas.

The entire surface area is covered with photovoltaic panels developing total power of 59 MW and able to produce 52,600 MWh of electricity a year, enough for a town of 15,000 people. On average, photovoltaic solar plants have total power of around 1 MW.
The system is made up as follows:

Renault’s photovoltaic installations will help to make a 200-tonne reduction in the CO2 emitted annually by electric engine production (calculated on the basis of the energy mix in France), the equivalent of 550 round-the-world trips by an internal-combustion vehicle emitting an average 100 g/km of CO2 or a fleet of roughly 1,500 vehicles each travelling 15,000 km a year.

The photovoltaic system also showcases the Group’s expertise in renewable energies. Sustainable ratings agencies have for a number of years ranked Renault among the most “virtuous” companies in terms of environmental management, particularly on carbon strategy. Renault continued to figure among the frontrunners in the 2011 rankings from SAM, Carbon Disclosure Project and Oekow Research.

The initiative is also an innovative way of protecting new vehicles before delivery to the sales network because it limits storm damage. The panels are designed to resist impact and hail in particular.

The photovoltaic project was developed by Renault, project initiator and coordinator, in its role as lessor, together with its partners Gestamp Solar and Coruscant (Cléon only), in their role as operational project managers. 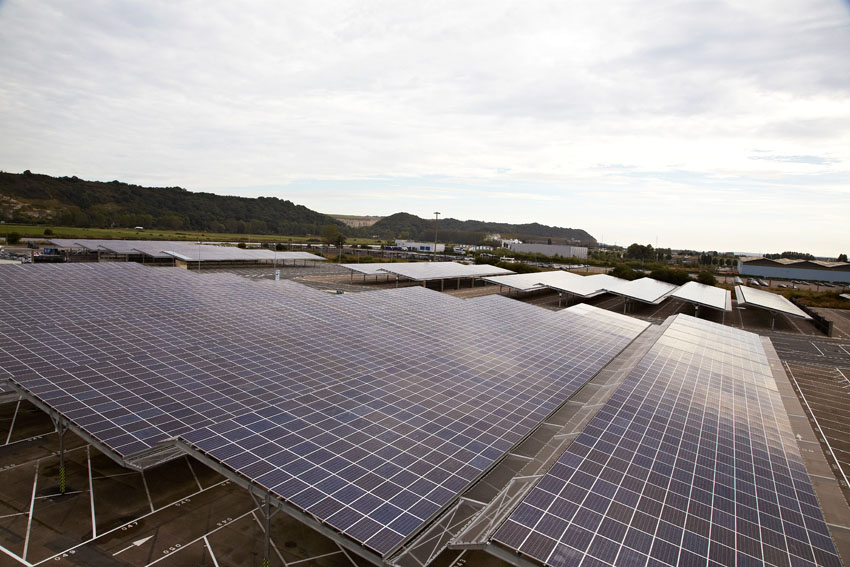 The system is also being rolled out internationally. The Group is to set up nearly 100,000 square meters of photovoltaic panels at the Valladolid and Palencia plants through an agreement with Cenit Solar, while feasibility studies are underway in Slovenia, Morocco, Brazil, Colombia, Chile and Romania. Further projects are being introduced at the Busan site in South Korea, with 300,000 square meters scheduled for finalization in December 2012.