China’s solar-panel industry has been rocked by recent US duties on its exports to combat alleged dumping and the specter of similar action by European authorities.

At least one company sees the standoff as an opportunity, however.

This “major crisis in the industry will lead to many big improvements in technology,” said Kevin Zhou, managing director of CSG PVTech (America) Inc.

“Anti-dumping against a Chinese industry may have a positive impact on the industry. It could help the industry grow to new heights,” he told China Daily at the Cerritos, California, offices of CSG PVTech’s US unit.

In the industry’s trade tussle with the United States, Zhou believes, weaker companies will suffer most, and some may fail.

But CSG is unlikely to be among those, due to its technology and products, he said.

CSG PVTech, a subsidiary of Shenzhen-listed CSG Holding Co, makes panels and modules studded with photovoltaic, or PV, cells that draw on the sun’s rays to produce electricity. Zhou said his confidence in the company is backed by recognition its products have received abroad. 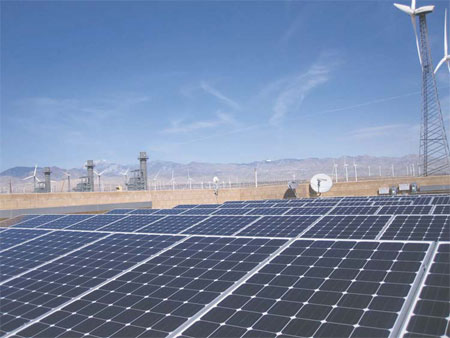 Photovoltaic solar panels made by China’s CSG PVTech are arrayed atop a large commercial building in Southern California. The company has been recognized internationally for the quality of its panels, for which the US is a major export market. Ivan Huang

Parent company CSG Holding is one of China’s major manufacturers of industrial glass. It was founded in 1984 in the Shenzhen Special Economic Zone, one of the early bold initiatives to open up the nation’s economy, as a seller of energy-efficient glass products – similar to the way computer maker Lenovo Group began life as a PC vendor.

Since it became a publicly traded company in 1992, CSG has participated in several high-profile projects such as China Central Television’s new tower, Beijing International Airport’s Terminal 3, Guangzhou International Airport and more than 15 office buildings along Chang’an Avenue in Beijing

“We’re a second-tier supplier to most major smartphone makers,” Zhou said, pointing to the 0.8-millimeter glass covering most devices.

The glass maker is one of just a few examples of Chinese companies that have successfully transitioned from a traditional industry to renewable energy. Competition is fierce, due to China’s huge excess capacity of solar-module production.

According to the China Photovoltaic Industry Alliance, a trade group for the domestic sector, the country in 2011 produced solar modules capable of generating 21 gigawatts of electricity – nearly two-thirds of the world’s capacity.

The massive output prompted investigations by the US government that culminated in the Commerce Department’s Oct 10 imposition of anti-dumping tariffs on imported Chinese solar cells and the European Union’s threat in September to conduct a probe of the industry.

“Trade issues can’t wipe out the photovoltaic industry or hold it back,” Zhou said. “The only way for a shot arrow to travel is forward. And the way to solve this problem is to analyze good solar-energy production capacity, balance it out and create a healthy cash flow.”

The 40-year-old received his MBA degree from the State University of New York at Buffalo in 2000.

“I always knew I would go back to China as my grandfather and my father did,” said Zhou, who decided to settle first in the Northeast.

His grandfather, after graduating from Yale University’s medical school, returned to China in the 1930s. His father went back home after studying at the State University of New York at Stony Brook in the early 1980s.

“To stay in the United States for one more year would only mean collecting another year of experience for me,” said Zhou, who returned to China to join CSG in 2005.

Although he oversees both European and US operations for CSG PVTech, it’s clear where Zhou’s focus resides.

One reason is that Germany, the biggest solar market in Europe, is expected to shrink dramatically once its government-subsidized installation of 52 gigawatts of PV capacity is reached. Germany had installed 28 GW by the end of 2011 and has added 5GW so far this year, according to Platts, a publisher of global energy data.

Zhou set up CSG PVTech’s US base in Southern California in 2011.

“California is a bigger market than Germany,” he said, pointing out that the US state meets the two key requirements – lots of sunshine and a huge demand for electricity.

Jack Pryor, CEO of Access Solar Inc, a Palm Springs installer of panels in homes, said his company is currently outfitting over 110 new townhouses in California with CSG PV panels.

“We selected CSG due to the longevity of the company and the fact that their primary business is involved with glass production,” Pryor said.

By working with installers like Access Solar, Zhou plans to turn CSG’s focus in the US from business-to-business to business-to-customer, in hopes of making the Chinese company a household name.

He admits, however, that like many Chinese enterprises, a limited understanding of marketing is a hurdle.

“We sell products, but we don’t understand how to sell service,” he said. “As a result, our value chain is too short.”

Zhou aims to sell both.

“Business positioning is the most important of all for a Chinese company to explore its journey overseas,” he said. “Offering both services and products as well will surely enrich market perceptions. Only those that go above and beyond will survive.”