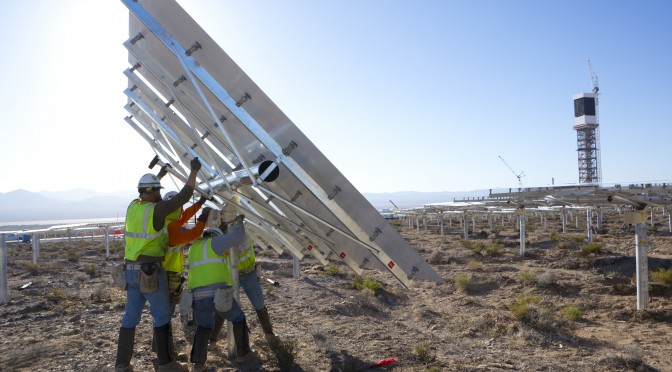 Concentrating solar-thermal power alone could supply 11.3% of the world’s electricity by 2050.

Alstom (Paris:ALO) has invested an additional US$40m in the American company BrightSource Energy, Inc to reinforce its partnership with the pioneering solar power company, which is a leader in the concentrated solar thermal tower technology. Since its initial investment in 2010, Alstom has progressively increased its participation and now holds above 20% of the capital.

Alstom and BrightSource are also collaborating on a series of solar research and development activities focused on storage and hybridisation with fossil fuels.

Both companies have also decided to expand their geographic partnerships to India and Australia, where solar conditions best suit BrightSource’s tower technology and where Alstom has a strong track record in engineering and construction of power plants. Previously, the companies announced partnerships in the Mediterranean Ring and Africa.

“Alstom’s additional investment in BrightSource reflects the important role of our solar thermal power tower technology in meeting the world’s growing demand for cost-effective power that is not only clean, but reliable as well,” said John M. Woolard, Chief Executive Officer of BrightSource.

According to the International Energy Agency (IEA), solar energy, including both Concentrated Solar Power (CSP) and Photovoltaics could account for 25% of global electricity by 2050 and cover a third of global energy demand after 2060. CSP alone could supply 11.3% of the world’s electricity by 2050.

Alstom is a global leader in the world of power generation, power transmission and rail infrastructure and sets the benchmark for innovative and environmentally friendly technologies. Alstom builds the fastest train and the highest capacity automated metro in the world, provides turnkey integrated power plant solutions and associated services for a wide variety of energy sources, including hydro, nuclear, gas, coal and wind, and it offers a wide range of solutions for power transmission, with a focus on smart grids. The Group employs 92,000 people in around 100 countries. It had sales of ?20 billion and booked close to ?22 billion in orders in 2011/12.

BrightSource Energy, Inc. is a leader in the design and development of concentrating solar thermal technology used to produce high-value electricity and steam for power, petroleum and process markets.