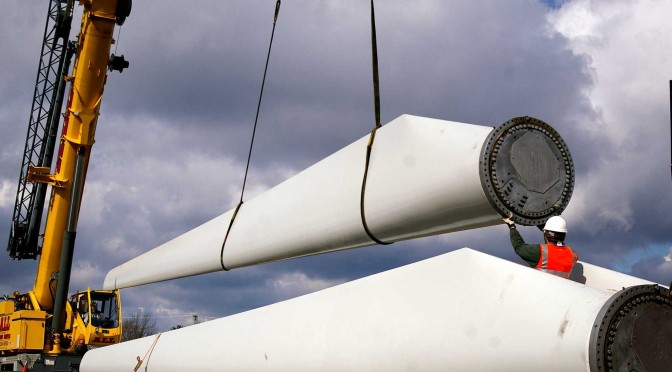 An answer to the world’s need for more renewable energy is to develop larger wind turbines that produce significantly more energy.

To achieve exactly this, Denmark inaugurates a test centre that can make the next generation of mega wind turbines a reality.

The first wind turbine to be tested measures 197 meters, but the facility can handle wind turbines up to 250 meters.

Danish test centre Oesterild is the first site in the world where wind turbines as high as sky scrapers can be tested and further developed under ideal wind conditions.

Denmark has a very ambitious energy policy heading for 50% of Denmark’s energy consumption in 2020 to be covered by wind turbine electricity and with the aim of being entirely free of fossil fuels by 2050. As part of this objective, the Danish government last year decided to establish a new prototype wind turbine test centre near Oesterild in the western part of Denmark. The Danish Technical University was appointed to be head of the establishment and operation of the new state-owned wind turbine test facility.

“So far, the test centre is the only place in the world for testing the mega wind turbines of the future. Here, DTU researchers can continue their strong partnership with the wind industry, which has given Denmark a world-leading position within the development of new wind turbine technology.”

A wind turbine is much more than a tower with blades; it is a complex piece of high-tech machinery with up to 20,000 components that must interact for the turbine to produce a high power output. The location of the coastal plantation Oesterild and its weather conditions make it a perfect wind turbine test site.

Minister for Trade and Investment, Pia Olsen Dyhr says:
”I am convinced that the new test centre Oesterild will play a significant role in the development of the next generation of wind turbines, and I am looking forward to the benefit this can have for Danish based wind power companies and consumers worldwide.”

“The constant innovation in the wind energy cluster in Denmark is the reason why foreign cleantech companies continue to establish R&D and production in Denmark to grow their global business.”

The Danish Minister for the Environment as well as Vestas CEO Ditlev Engel and Henrik Stiesdal, Chief Technology Officer at Siemens Wind Power will attend the ceremony.

Test stands open for tenders
The test centre features a total of seven test stands. Both Vestas and Siemens have bought two stands, and Siemens has already erected a 197-metre turbine on one of them. DTU disposes of the last three stands, of which one has been leased to the Chinese wind power company Envision Energy, and two are currently put out to tender.

”Test centre Oesterild will become a great base for DTU’s research activities within meteorology, wind turbine technology, and, not least grid connection which is vital in order for the electricity to reach consumers effectively.”