New photovoltaic (PV) projects on agricultural land are playing a pivotal role within the rapid growth of distributed PV power generation in China, with more than 300 MW of PV projects now being tracked in the NPD Solarbuzz China Deal Tracker report.

An increasing number of PV project developers in Central and Eastern China are now prioritizing these new opportunities, in particular in the provinces of Xinjiang, Hunan, and Hubei. The China Energy Conservation and Environmental Protection Group (CECEP) is currently targeting more than 100 MW of PV projects specifically within the agricultural segment.

According to Steven Han, analyst at NPD Solarbuzz, “The agricultural PV market segment in China was previously overlooked by downstream PV suppliers and installers. However, with the threat of anti-dumping actions from the United States and Europe potentially restricting their available sales channels, creating additional demand locally is now essential for both module and balance-of-systems suppliers.

“Greenhouses have become a popular choice for agricultural PV installations, because they offer benefits in addition to a supply of electricity,” added Han. “PV panels located on greenhouses can shield the sunlight, replace building materials, and add to the overall aesthetics.”

With farmland in short supply in Central and Eastern China, installing ground-mounted PV can be a challenge. Therefore, rooftop PV installations have become a higher priority, with the most attractive developments often combining agricultural applications with PV generation. This mutually-beneficial arrangement allows PV developers to benefit from the PV power generation while providing the farmers a revenue stream. An example is the 9.8 MW PV project by Zhongli Talesun and China Power Investment (CPI), developed in Changshu. In 2011, they mounted PV panels on the roof of a mushroom plant. Other smaller scale installations have been enabled by the Golden Sun programs.

Commercial agricultural PV projects continue to receive the backing of top-tier PV developers in China, and this new segment is forecast to grow rapidly in the coming years. Developers are trying to find additional land space in both central and eastern China in an effort to further boost domestic PV demand. 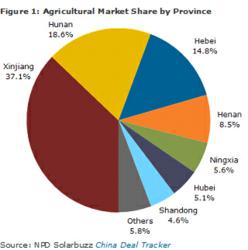 NPD Solarbuzz, part of The NPD Group, is a globally recognized market research business focused on solar energy and photovoltaic industries. Since 2001, NPD Solarbuzz has grown its client-base to include many of the largest global PV manufacturers, major investment banks, equipment manufacturers, materials suppliers, hedge fund companies, and a vast range of other multi-nationals. NPD Solarbuzz offers a wide array of reports, including Marketbuzz, an annual global PV industry report, and Solarbuzz Quarterly, which details both historical and forecast data on the global PV supply chain. The company’s research also provides annual downstream PV market reports by region for Europe, Asia Pacific and US markets. In addition, Solarbuzz.com is a recognized and respected online resource within the solar industry. For more information, visit http://www.solarbuzz.com or follow us on Twitter at @Solarbuzz.