The El Hierro Sustainability Plan, approved on the 27th of November, 1997 by the Council of the island of El Hierro, poses the idea of making the island a self-sustained location.

This possibility has been backed up in the “White Paper for a Community StrategyAction Plan” developed by the European Commission, which includes the following quote: “[…] a number of pilot communities, regions, citiesislands will be ed from those which can reasonably aim at 100% power supply from renewables[…]”. The project was finally included in the El Hierro Management Island Plan, approved definitively on the 17th of June, 2002.

The island was declared a biosphere reserve in January, 2000. This distinctive seal was awarded to the island for the special conservation of its environmentalcultural richness, as well as for its efforts towards the progressdevelopment of its inhabitants. This fact means that any action aimed at reducing the anthropic pressure on its natural habitats through the self-supply of electrical energy via renewable energy is considered of an outstanding importance to the social, economicenvironmental development of the island of El Hierro. 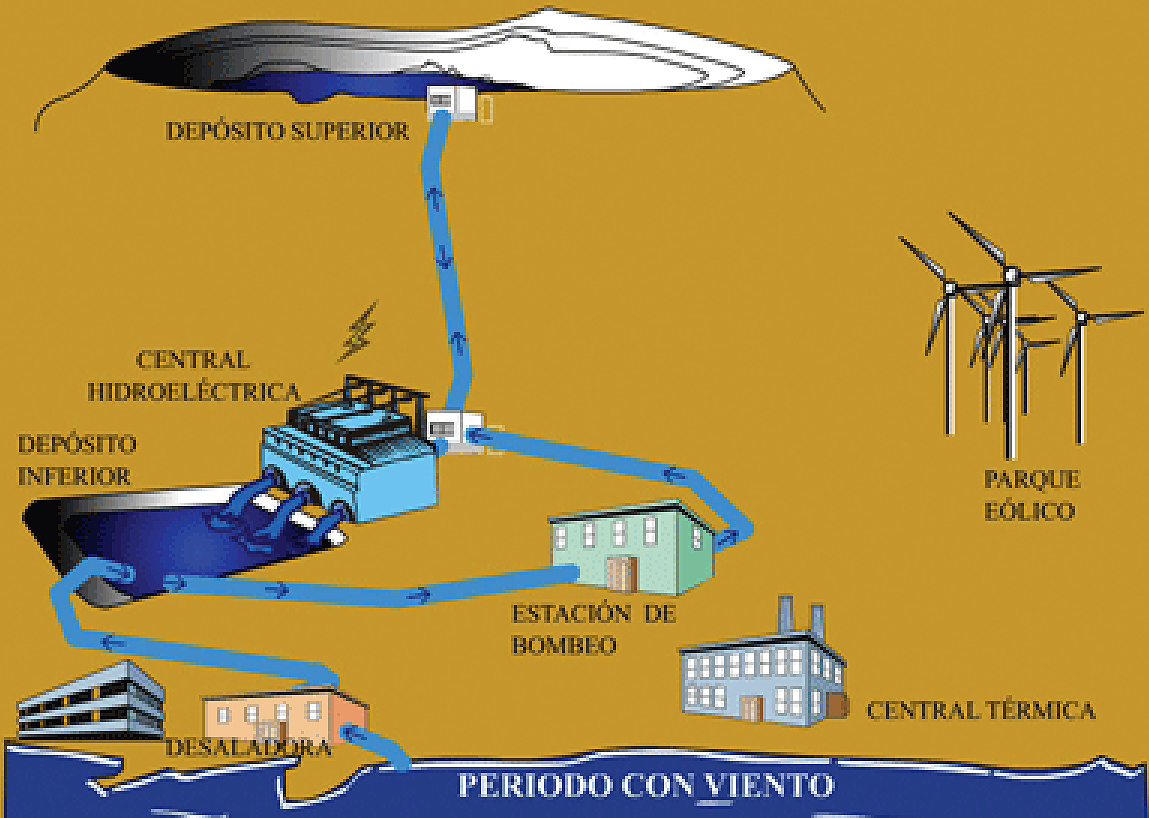 Within this framework, the Council of El Hierro, Unelco S.A.the Canary Islands Technological Institute (I.T.C.) chose the development of a project called the “El Hierro Hydro-Wind Plant”, with the aim of making the island the first one to be able to supply itself with electrical energy through fully renewable energy sources. During the first stage, a technical feasibility study was carried out in which the optimal configuration of wind generators, hydraulic turbines, deposit volumespumping equipment to be installed in the new plant was determined.

On the 20th of March, 2007, the General Director of the Institute for DiversificationEnergy Saving (IDAE)the President of the Island Council, in representation of the project developer, Gorona del Viento El Hierro, S.A., signed the agreement whereby the mechanisms for the provision of public fundscontrolmonitoring of the actuations of this initiative are regulated on the 20th of March, 2007. This date was key, since it guaranteed the majority of the financing necessary to perform the relevant works.

The project, whose cost amounts to 64.7 million euros, is promoted by Gorona del Viento El Hierro, S.A., with participation by the Island Council (60%), Endesa (30%)the Canary Islands Technological Institute (10%). For this investment, subsidies set forth in the General State Budget have been contemplated up to an amount of 35 million euros, which will be transferred to the IDAE as nominative subsidies to be granted to Gorona del Viento El Hierro, S.A. In 2007, the first provision of 90,000 euros had already been set forth; in 2008, it was established in the amount of 4.4 million euros; in 2009, the amount of 14.6 million euros is foreseen,finally, between 20102011, 45 million euros.

The public support needed by the initiative has been granted within the framework of the actuations carried out by the Government in terms of saving, energy diversification, use of renewable energiesrespect for the environment, as well as because of being a project with high technologicalexemplary innovation, which will allow an integrated hydroelectrical-wind energy management model that is highly replicable on other islandsthe Peninsula to be put into practice, since it will facilitate the integration of wind energy into the national electrical system.

The IDAE is providing its experience to this project in its development stage by performing monitoring, inspectioncontrol tasks during the stages of design, supply, assembly, start-upoperation testing, ensuring the correct application of budget funds.

The final aim of the project is to cover the island’s consumption needs with energy from renewable sources. To do so, a wind farmhydraulic plant, interconnected via the current electrical system of El Hierro, which is owned by UNELCO-ENDESA, will be installed.

Providing the island with energy from fossil fuels entails a number of difficulties, such as economic cost, dependence on transportation of the fuel itself, the environmental cost of using fossil fuels, etc.

On the other hand, the use of renewable energy presents great economic, socialenvironmental advantages, although it has the inconvenience of affecting the stability of the electrical system, especially when wind energy, which is difficult to manage, is used.

The hydro-wind project integrates a wind farm, a pumping seta hydro-electrical plant. The wind farm is able to supply electrical energy directly to the network, while simultaneously feeding a pumping set which dams water in an elevated deposit as an energetic storage system. The hydroelectrical plant uses this stored potential energy, guaranteeing both electrical supplynetwork stability.

The wind farm carries out the capturetransformation of wind energy into electrical energy.

In 2005, the electrical demand was 35 GWh; the electrical power currently installed (Diesel) is 11.36 MW. The current growth rate of the demand for energy has been 8%, although it is expected to stabilise in the short term (3-5 years) at an annual rate of 4%.

The project is aimed at the design, development, constructioncommissioning of a hydro-wind system able to cover the electrical demand of the island of El Hierro, making this island a territory that is self-supplied in terms of electricity, strictly through renewable energies.

The system will be made up of two water deposits, a wind farm, a hydroelectrical plant, a pumping planta diesel engine plant (existing). The operation’s philosophy is based on supplying the electrical demand of the island with renewable sources, thus guaranteeing the stability of the electrical network; the diesel engine plant will only operate in exceptional/emergency cases, when there is not enough windwater to produce the demanded energy.

With the hydro-wind plant, an intermittent energy source can be transformed into a controlledconstant electrical supply, thus optimising the use of wind energy. In this way, the thermal plant operates as a backup by way of reserve, only during periods when there is an absence of wind, minimising the consumption of fossil fuels.

The electrical demand foreseen for the design amounts to 48 GWh/year in the year 2015, based on the energy planning for the Canary Islands, PECAN 2006; nevertheless, the dimensioning of the conduction of waterdeposits will be created based on the demand foreseen for the year 2030, since they are not extendable in a modular way. Likewise, the higher capacity of the deposit will be increased in to meet the water needs required by the island.

The Hydro-wind project is made up, at this time, of the elements listed below:

The following diagram shows the basic configuration of the Hydro-wind plant:

The control system will regulate the operation of the set in such a way that the supply is guaranteed, during adequate conditions, to maintain the stability of the distribution network.

El Hierro island, part of the Canary Islands, a world biosphere reserve since the year 2000, rises from the waters of the Atlantic ocean, quickly reaching 1,500 metres in height, which causes a peculiar landscape with steep hillsides permanently beaten by the wind. It has a surface of 278 km2a population of 10,700 inhabitants.

The environmental benefits, both from the point of view of energythe Hydrological Plan for El Hierro will be vital to this project. This small island will be an example that will be imitated throughout the World.

This project will avoid an annual consumption of 6,000 tonnes of diesel, which is equal to 40,000 barrels of oil that would have to be imported by boat to the island, thus creating a savings of over 1.8 million euros a year.

Likewise, the yearly emission of 18,700 tonnes of CO2 –the main cause of the greenhouse effect– will be avoided. This CO2 is equal to that which could be fixed by a forest of between 10,00012,000 hectares, a surface equivalent to 20,000 football pitches.

Also, the yearly emission of 100 tonnes of sulphur dioxide400 tonnes of nitrogen oxides, equivalent to the emissions of a regular bus that drove 600 million kilometres, will be avoided.

Its most precious resource will also be guaranteed: water. This is due to the fact that, in to elevate the water from the island’s aquifer, conventional energy will not be needed any more, as well as because the island will have three desalinisation plants (El Tamaduste, El GolfoLa Restinga). It will therefore tend to be self-sufficient, despite being an isolated territory that is not connected to any continental location.

Likewise, the Council of El Hierro frames this initiative within a Sustainable Development Plan, which applies to all areas of management, has been internationally applauded through Unesco (which declared the entire island a world biosphere reserve)works in complementary energy awareness projects among the local populationin several European projects through which it is intended that, in a short period of time, the island will have a public service driven by hydrogenother alternative energy sources.

17 million Europeans600 million people throughout the entire World live on islands,they will all have a reference in El Hierro regarding what the future of energy should be. A clear alternative to oil, thanks to waterwind.