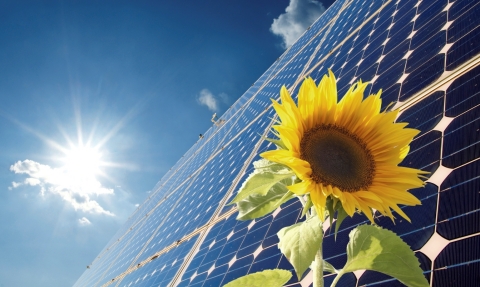 Solar energy has the potential to be a renewable, carbon-neutral source of electricity but cost of photovoltaics – the devices that convert sunlight into electricity – has slowed widespread adoption of this resource.

The RTI solar cells are formed from solutions of semiconductor particles, known as colloidal quantum dots, and can have a power conversion efficiency that is competitive to traditional cells at a fraction of the cost.

The RTI solar cells are formed from solutions of semiconductor particles, known as colloidal quantum dots, and can have a power conversion efficiency that is competitive to traditional cells at a fraction of the cost.

The RTI-developed solar cells were created using low-cost materials and processing techniques that reduce the primary costs of photovoltaic production, including materials, capital infrastructure and energy associated with manufacturing.

Preliminary analysis of the material costs of the technology show that it can be produced for less than 20 dollars per square meter-as much as 75 percent less than traditional solar cells.

“Solar energy currently represents less than 1 percent of percent of the global energy supply, and substantial reductions in material and production costs of photovoltaics are necessary to increase the use of solar power,” said Ethan Klem, a research scientist at RTI and co-principal investigator of the project.

“This technology addresses each of the major cost drivers of photovoltaics and could go a long way in helping achieve that goal,” Klem added.

In demonstration tests, the cells consistently provided a power conversion efficiency more than 5 percent, which is comparable to other emerging photovoltaic technologies.

“The efficiency of these devices is primarily limited by the amount of sunlight that is absorbed. There are many well-known techniques to enhance absorption, which suggests that the performance can increase substantially,” said Jay Lewis, a senior research scientist at RTI and the project’s other principal investigator.

The cells, which are composed of lightweight, flexible layers, have the potential to be manufactured using high volume roll-to-roll processing and inexpensive coating processes, which reduces capital costs and increases production.

Unlike traditional solar cells, the RTI-developed cells can be processed at room temperature, further reducing input energy requirements and cost.

In addition to being low-cost, the new cells have several other key benefits, including higher infrared sensitivity, which allows the cells to utilize more of the available solar spectrum for power generation.

The technology was recently featured in a paper published in Applied Physics Letters.