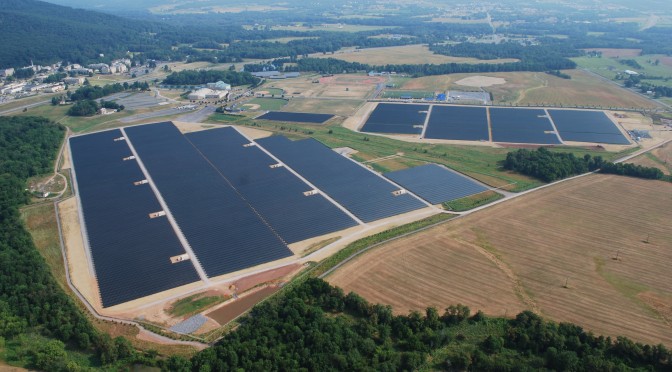 Constellation financed, owns and operates the approximately $50 million solar facility on behalf of its customer, the state of Maryland. Electricity generated by the system is purchased by the state’s Department of General Services and the University System of Maryland under 20-year solar power purchase agreements with Constellation.

“Solar energy means Maryland jobs. In just five years, we’ve put 530 times more solar on the grid, and we’ve put 2,000 men and women to work in solar sector jobs,” said Gov. Martin O’Malley during a ribbon-cutting ceremony for the solar installation, located at Mount St. Mary’s University. “With partners like Constellation, we will continue to make investments in innovative technologies that create jobs and allow us to strike a better and more sustainable future for our children.”

“Constellation is proud to bring one of the state’s largest solar installations online and support Maryland’s leadership in renewable energy,” said Kenneth W. Cornew, president and CEO of Constellation. “Projects like this are part of our commitment to provide customers clean, affordable energy choices.”

The grid-connected system is expected to produce more than 20 million kilowatt hours of emissions-free electricity per year. Generating the same amount of electricity using nonrenewable sources would result in the release of 17,981 metric tons of carbon dioxide annually, according to U.S. EPA data.

The ground-mounted solar power plant was constructed by First Solar, using approximately 220,000 of its advanced thin film PV panels situated on 100 acres of land leased by Constellation from Mount St. Mary’s University. In addition to the 16.1-megawatt system, Constellation developed a 1.6-megawatt solar power system on the site that will supply power directly to the university.

“This significant step in sustainability for Mount St. Mary’s University and the state of Maryland shows that our commitment to being good stewards of the environment is steadfast,” said Thomas H. Powell, Mount St. Mary’s University president. “The solar farm presents an exciting learning and teaching opportunity for our students and for the local community, and places the Mount at the forefront in championing responsible land use and promoting renewable energy resources.”

In February 2009, the Maryland Energy Administration, in partnership with the University System of Maryland and the Department of General Services, approved the award of four renewable energy projects under the Generating Clean Horizons program. The initiative was intended to spur the development of large-scale, commercial renewable energy projects, and the state issued requests for proposals for long-term power purchase agreements from renewable sources delivering clean power to the grid by 2014.

Constellation currently owns and operates more than 112 megawatts of solar installations that have been completed or are under construction for commercial and government customers throughout the United States. In Maryland, Constellation has developed nearly 25 megawatts of solar projects for customers, including Anne Arundel County, Coppin State University, General Motors, Maryland Science Center and McCormick & Company.

By structuring its solar projects as power purchase agreements or solar services agreements, Constellation offers solar installations that may require no upfront capital from customers and may provide fixed power costs that are less than projected market rates.

Constellation (www.constellation.com), a business unit of Exelon Corp., is a leading competitive retail supplier of power, natural gas and energy products and services for homes and businesses across the continental United States. Constellation’s retail business serves more than 100,000 business and public sector customers, including more than two-thirds of the Fortune 100, and nearly one million residential customers.