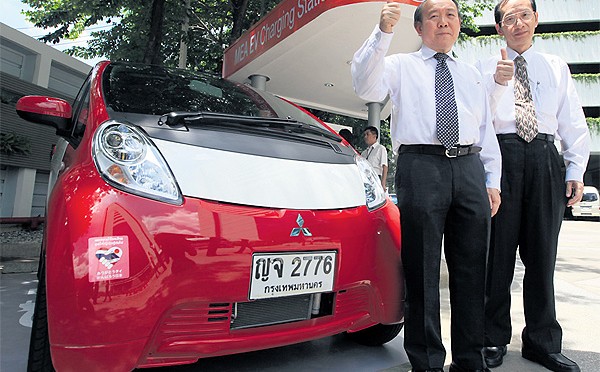 The Metropolitan Electricity Authority has decided to demonstrate through practical measures rather than just tell people about how electric vehicles are the future of transportation.

Aimed at convincing motorists that electric cars are the smarter choice, the MEA is piloting a project to show how efficient and practical the use of clean energy in vehicles is in daily life.

As part of this effort, the MEA has recently opened an electric vehicle charging station at its headquarters on Phloenchit Road to showcase the technology of recharging the batteries that power electric cars.

Normally, it takes six to eight hours to completely recharge an electric car using the standard household 230 volts of electricity. But at the charging station, it usually takes only half an hour at the higher rate of 400 volts.

“The batteries are installed inside a car with a convenient charger that allows the user to recharge a car as easily as refuelling,” said Voravoot Pornvoranunt, MEA deputy governor for Technology and Planning.

As for recharging at home, electric car owners need an additional device to connect the vehicle to a household electric socket, which costs more money.

Whether it is charged at home or at the charging station, an electric car normally has enough energy to travel up to 150 kilometres, Mr Voravoot said.

The vehicles consume energy only for running the air conditioner when stuck in traffic, whereas gas- or fuel-powered cars keep their engines running all the time.

“Despite the higher price that includes 100% import tax, an electric vehicle costs about five to six times less [to charge] when it comes to energy consumption,” Mr Voravoot said. An MEA staff member demonstrates how to charge the electric vehicle’s batteries.

Usually, a fuel-powered car costs about 3.5 baht per kilometre while an electric car only costs between 60 and 70 satang per km, he said. As for cars that run on natural gas, although it now costs about 1 baht per kilometre, the catch is that the lower price of this type of energy is subsidised by taxpayers.

Last year, the MEA launched a feasibility study of electric vehicle use in cooperation with Mitsubishi Motors (Thailand) which provided one Mitsubishi i-MiEV, a five-door hatchback launched about two-and-a-half years ago.

In the nine-month study from Sept 6, the car was tested in real Bangkok traffic conditions and tested to determine its energy consumption rates in different situations.

The possible effects of electric car charging on the MEA’s electricity supplying system were also being examined in the study, said Sukit Kiatboonsiri, director of the MEA’s Research and Development Department.

An electric car of the same model that is equipped with ABS and an automatic transmission system and has a top speed of 140km/h has been on display at the MEA’s headquarters since Aug 1.

Five more electric cars have been ordered and are expected to arrive in Thailand by the end of this year.

Each of them costs 2.5 million baht while a charging device required for plugging the car’s charger into a household electric outlet costs 600,000 baht.

These cars will be used in the MEA’s pilot project.

Initially, the cars will be used for transporting documents between MEA offices. Twenty cars in total will be imported for use by the MEA and nine more charging stations will be constructed in the next four years.

The MEA is also conducting a related joint study with Chulalongkorn University about the technology of electric cars and charging stations, Mr Sukit said.

He said the study results are expected by the end of the year and will be drafted into a roadmap of the MEA’s bid to encourage use of electric vehicles.

Electric cars have yet to become popular among motorists in Thailand because of certain factors including the considerably higher price, the fact that there are no electric car assembly factories here and concerns over battery recharging and car performance, Mr Voravoot said.

“For starters, the government agencies will have to show to and convince consumers that electric vehicles really are a smart choice and more measures such as tax incentives are needed,” he said.