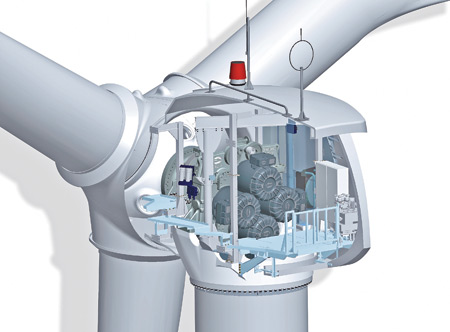 Company officials with Clipper Windpower confirm that layoffs will reduce the total employment at the wind energy company by 174 positions.

The total number of people let go in Cedar Rapids would be about 75. At one time, Clipper employed about 300 people at the Cedar Rapids facility that opened in 2005.

Christina Stowell, Human Resources Manager, for the company e-mailed a one paragraph statement about the cutbacks. The statement said “in response to continued challenges facing our industry and our company, Clipper management has been working on developing a sustainable business model with an emphasis on its service business. The effort requires a downsizing and refocusing of our operations, reducing the company’s total workforce from 550 employees to 376.”

The statement went on to say Clipper would not close any physical locations—including the production and assembly facilities in Cedar Rapids.

The statement did not say how many of the layoffs would come from Cedar Rapids. The company is headquartered in Carpinteria, California.

Clipper Windpower was recently sold by United Technologies to Platinum Equity of California. Wind power enthusiasts in Iowa say that sale probably had some bearing on the layoff announcement. A bigger factor, though, may be the deadlock in Congress to extend tax credits for the wind industry. Those current credits expire on December 31st.