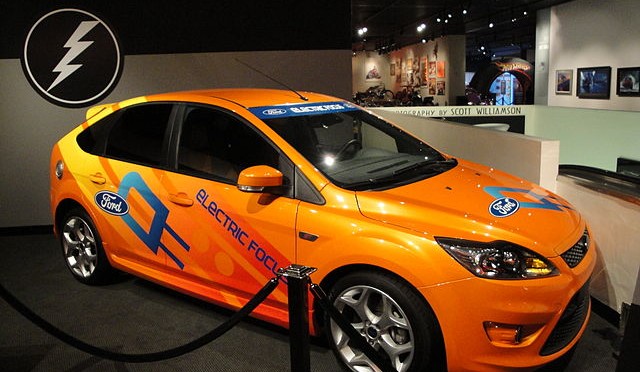 Electric cars is still an acquired taste, like an expensive single-malt scotch. No one’s been able to put it in a six-pack, quite yet.

Not that long ago, I ruffled the feathers of the Tesla (NAS: TSLA) flock by suggesting that the acceptance of the electric car might be better served by the introduction of commuter-oriented, affordable electric vehicles for the masses, rather than drag racing “hood ornaments for the eco-conscious wealthy.”

My argument was that it took millions of Model Ts pouring out of Henry Ford’s factories for the automobile to become something more than a luxury item, and that it will take a magnitude of electric vehicles on the road, more than Tesla could ever sell at a starting price of $57,400 (for the Model S sedan, before any tax credits) for the electric car to ever be taken for a practical transportation alternative — not to mention,  a profitable product. What would Henry do?
Here comes Ford (NYS: F) again, a century after the Model T was introduced, announcing its commitment to the future of the electric vehicle, with a $135 million investment in next-generation batteries and other electric vehicle components. It is also, according to this release, “dedicating a 285,000-square-foot research and development lab … to focus almost entirely on hybrids and electrification.” Ford’s newly introduced Focus Electric should be the recipient of any breakthroughs this dedication to electrics should bring. The Focus Electric’s list price of $39,995 is still not quite in the range of the mid- and lower- middle classes, but it does edge closer to affordability after a federal tax credit of $7,500, and — if you live in the Golden State — a $2,500 California rebate.

The all-electric Nissan Leaf, at $35,200 and General Motors‘ (NYS: GM) plug-in hybrid Chevy Volt, at $39,145 (before any credits), are also still not candidates for most suburbanite’s driveways.

No, there aren’t any electric-Model T candidates on the road, as yet, but Ford’s touting of its efforts to put even more resources into its electric vehicles program can only help all electric car manufacturers — especially Tesla.

Electric is still an acquired taste, like an expensive single-malt scotch. No one’s been able to put it in a six-pack, quite yet. Will Ford be the first?

Ford’s investment in electric vehicles reveals a company that has a clear long-term vision. At the same time, the setbacks in Europe have placed short-term pressure on its stock. Have these short-term pressures created an incredible buying opportunity, or are there other hidden risks with the stock that investors need to know about? To answer that, one of our top equity analysts has compiled a premium research report with in-depth analysis on whether Ford is a buy right now, and why. Get instant access to this premium report.