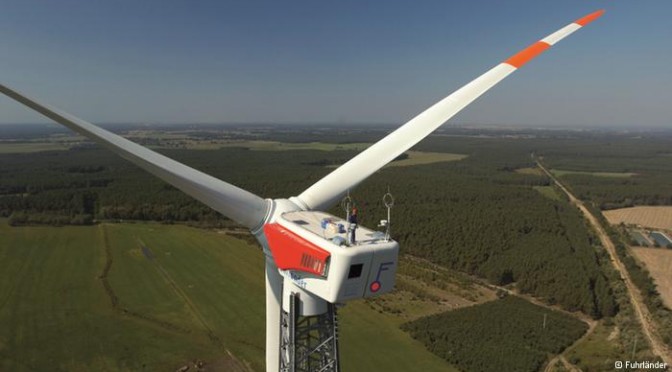 The Ukraine offers good locations for wind turbines and promotes regenerative energies, because the country wants to become independent from fossil fuels.

Dipl.-Wirt.-Ing. (FH) Willi Balz, Windreich AG, is the second largest shareholder of Fuhrländer AG with headquarters in Liebenscheid (Siegerland), and welcomes the change of ownership of Germany’s oldest wind turbine manufacturer and emphasis.

The new owner structure ensures the future of the traditional manufacturer and opens up a large market. The Ukraine offers good locations for wind turbines and promotes regenerative energies, because the country wants to become independent from fossil fuels. The bitter experience with Chernobyl also supports this clear political orientation.“

The Ukrainian investor Maksym Yefymov and the Ukrainian metal and mechanical engineering company PJSC Energomashspetsstal, Kramatorsk, took over the majority of the shares of Fuhrländer AG via cash pooling at the end of April 2012. Willi Balz, Windreich AG, currently with a 16.87% share in Fuhrländer AG, is extremely pleased about the entry of the new, entrepreneurially dedicated and industrially positioned majority shareholder, and remains an enthusiastic shareholder of Fuhrländer. Together with the new management, Windreich AG is testing a further and deepening collaboration; amongst other things with exclusive sales approaches in selected markets. In the course of its onshore growth strategy, Windreich AG has the declared goal, as before, of becoming the largest buyer of Fuhrländer plants, via the Windreich subsidiary Natenco.

The wind park builder from Wolfschlugen wants to generate over 100 MW of wind energy in Germany alone, in the coming two years. Thereby, the newly conceived 3 MW plants from Fuhrländer play a leading role, in being able to use locations with weak wind and in wooded areas, even in South Germany, optimally, and therefore accommodate the return requirements of the investors. Thereby, with more than 1,000 onshore plants projected, built, financed, sold in operational management and kept in own stock since 1999, Windreich AG has expertise without precedent.

The Windreich group is also intensifying onshore business internationally. In July 2012 the wind pioneer from Wolfschlugen decided to set up the new 3 MW plants in three neighbouring countries. Starting from 2014, over 100 MW of clean and safely produced, affordable energy will be generated in Poland, France and Austria. “We will start further projects at short intervals. We want to build 150 MW in the onshore sector every year until 2015,” emphasises Willi Balz and adds: “In Morocco we are in a consortium with Fuhrländer, Ansaldo Energia and ABB; in a successfully led competition for the realisation of 850 MW wind turbines at five locations.“

After the Windreich group achieved market leadership in the past few years, and consistently expanded, the onshore sector has also been expanded and internationalised. Therefore, investors in the area of regenerative energies are offered unbeatable wind energy, in an internationally unique investment portfolio.

Fuhrländer AG, founded in 1960, has significantly characterised wind energy use inland, and is amongst the pioneers of wind energy in Western and Eastern Europe, Brazil, Vietnam, Turkey and now Ukraine. Up until now the product range encompasses 1 to 2.5 and will soon include 3 megawatt plants; including the worldwide highest wind turbine at Laasow near Berlin with a total height of 214 metres. Hub heights from around 140 metres make the consistent use of wooded areas possible.

Wind turbine from the Fuhrländer AG, the oldest German manufacturer

A modern onshore wind turbine can cover the annual electricity requirement of more than 5,000 households, and generates the energy used for its production in just six months. The operating period is at least 30 years.

If you compare today’s results and the dimensions of a plant with the first ones set up by the Windreich group, the progress is clear. The electricity that a wind turbine built in 1999 generates per year can be fed into the network in about a month by today’s plants. With the new professional ownership structure and the progressive 3 MW technology, Windreich AG and Fuhrländer AG are heading for a successful future, by servicing niche markets.

You can find further information at www.windreich.ag.