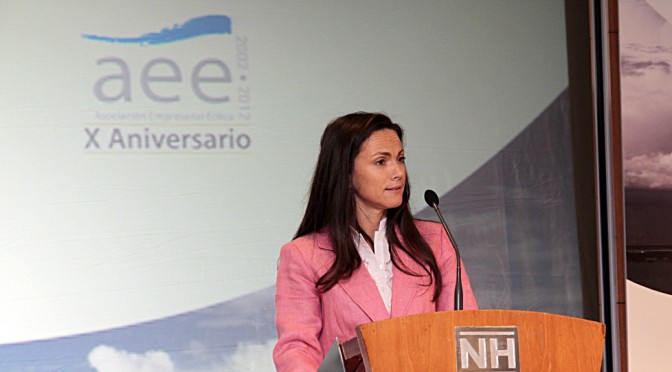 The wind energy industry has always been a constructive and dialogist sector, it has reached out to the Government to bring together the industry´s roadmap. That is what we have been doing in recent months but, instead of listening to us, it seems that the Government is considering measures that could be the final blow for wind energy”, said Rocío Sicre today, Chairman of the Spanish Wind Energy Association (AEE), in a press conference in Madrid. “The tax of 11% that is being considered over the sector’s turnover is only understood if someone has not calculated numbers correctly and is mistaken”.

According to her, a tax like this would be of “dubious legality”. Establishing a charge that is imposed in a general and indiscriminate way on the production of wind power could overlap with the Tax on Electricity and with some regional environmental taxes that already tax the production of electricity.

Sicre has detailed the economic impact that such tax would have on the sector: it would cost around 3 billion euros, it would reduce the profitability of wind farms by 30% and about 15% of the facilities in place may not meet the terms of the payment of their debts from the very first moment, among other things.

“This would go against the Electricity Industry Act, which makes it very clear that the principle of reasonable profitability must be respected. It would undermine legal certainty because it breaks the rules half way through the game and it would be the final straw which breaks the trust of domestic and international investors which would increase the country-risk”, said the Chairman.
Wind energy is already bearing a higher tax burden since on top of taxes common to other technologies (such as those from the state and municipalities), they bear the fees that some regions also apply. Spain is among the European countries where wind power carries a heavier tax burden.

“The wind industry has already made sacrifices in the past, and may continue to do so whenever they are fair and agreed upon”, said Sicre. But she added that “the rope cannot be tightened anymore”.

The Chairman emphasized that Spain needs more now than ever, productive sectors that create jobs and drive us out of the economic crisis to change the country’s economic model for the future. “The wind energy industry is a model: it has always grown according to the objectives, it is a world reference, it creates wealth and employment, it reduces fossil fuel imports, it exports technology and it is the technological image of Spain. That is why wind power needs to be saved.”

Sicre has asked the Government to reconsider the tax measures they are considering. “All the countries around us are committed to wind power and all analysts point to it as the key technology in any modern electric mix”. If the tax on wind power generation becomes effective, “the industry will use every legal means at its disposal to fight for their survival”.

Along the same lines, Christian Kjaer, CEO of EWEA, the European Wind Energy Association, has spoken today to urge the Spanish Government to reconsider its position: “Europe looks with astonishment and concern at the Spanish Government’s proposal to introduce a discriminatory tax on wind power generation, such tax will destroy jobs in the country, it will damage Spanish wind companies that are world leaders and will set a bad precedent for Governments in Europe and beyond. As such, it represents a threat to the wind energy industry”.

Kjaer has quoted the European Commissioner for Energy, Günther Oettinger, who in April said that renewable energies should not be the scapegoat of the crisis. “Unfortunately, this is precisely what the Spanish Government seems to be doing”. Imposing “a discriminatory tax to a world leader´s domestic industry will lead to a loss of tax revenue for companies and employees and it will damage the economic growth that Spain so desperately needs. It makes no sense at all.”