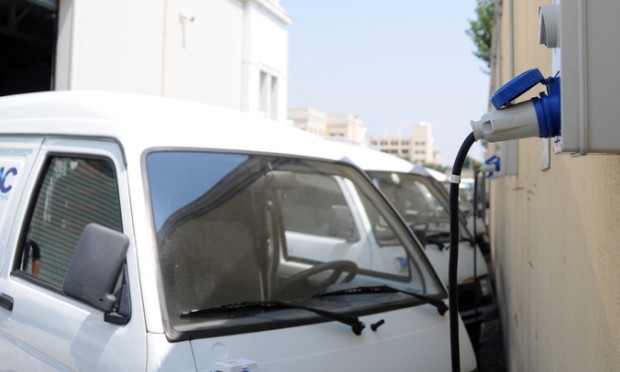 It’s not too uncommon to find hybrids and electric cars within the Department of Defense budget.

Electric vehicles are becoming a more common sight on military bases as the Department of Defense adds “road-capable” electric cars such as the Chevy Volt to a fleet of thousands of smaller battery-powered vehicles.

Some of the Micro-Vett Edyone electric vehicles assigned to Naval Support Activity Naples, Italy, are plugged in to charge outside of the public works department at the Capodichino Navy base.

Electric vehicles are becoming a more common sight on military bases as the Department of Defense adds “road-capable” electric cars such as the Chevy Volt to a fleet of thousands of smaller battery-powered vehicles.

Last month, the first two Chevy Volts arrived at Marine Corps Air Station Miramar, Calif., where they will be used as nontactical government vehicles. Eighteen Volts are about to hit the roads at Joint Base Andrews, Md., Marine Corps and Air Force officials said.

The moves are part of the Defense Department’s “green initiatives,” which seek to reduce the country’s dependence on foreign energy sources.

The Volts, which can run on gas or electricity, join more than 3,000 electric vehicles already in the military fleet, according to the 2011 Federal Fleet Report.

Most of the battery-powered cars used by the DOD to date have been “neighborhood” or “low-speed” electric vehicles that resemble golf carts and are not suited for the open road.

Slow-moving electric vehicles were first tested at overseas military bases in 2007 in South Korea and in 2008 in Germany. Today they are used on bases all over the world, according to DOD officials.

The Navy, for example, has 12 slow-moving electric vehicles in Naples and six at Naval Air Station Sigonella, and each base will add 10 next fiscal year, according to Lt. Timothy Hawkins, a Navy spokesman.

James Muldoon, a science adviser with U.S. Army Pacific in Hawaii, said military bases on the island will get some of their first road-capable electric vehicles — a pair of electric trucks — later this year.

“Our goal is to reduce our needs of fossil fuels and lower greenhouse gas emissions,” Chris Manis, deputy director of installations and logistics at Miramar, said in a news release announcing the Volts’ arrival. “We can cut back and still execute the missions we need to complete.”

The Volt can run for 38 miles off pure electricity before a gas-powered motor begins to generate electricity to power the car. When the car is consuming gas, the mileage can be as high as 100 miles per gallon.

The Volt’s ability to run on gas as well as electric power means its range isn’t limited by the availability of charging networks. Purely electric cars, such as the Tesla Roadster and the Nissan Leaf, need to be recharged frequently to keep their batteries topped up.

Miramar has installed four recharging stations to top up Volt batteries with electricity generated by solar panels that help the base draw zero energy from the nearby city of San Diego, officials said.

The Volts are just the start of an electric fleet that Miramar hopes to receive as technology advances and the range of the cars increases, Manis said.

They come equipped with a screen that displays the gas mileage and battery life of the car, and they regenerate electricity for the battery when the driver coasts or convert energy when the brakes are used.

An added benefit of cutting back on fossil fuels and using renewable energy is helping keep the environment around the installation clean, Miramar officials said.

“We have a lot of interest from the military community in the Chevy Volt,” Malcho said.

In a place like Hawaii, home to a large military community, electric vehicles such as the Volt make sense because driving distances are not large, she said, adding that Chevrolet sold 1,800 Volts nationwide in June.

With the limited range of purely electric vehicles — typically not much more than 100 miles on a fully charged battery — on-base charging stations are essential to expanded use.

Off-base charging station networks are growing rapidly near military installations in Hawaii, where more than 200 stations have been built at parking lots, hotels, shopping centers and office buildings, and on the West Coast, where thousands of new stations will soon allow motorists to drive an electric vehicle from the Mexican border to British Columbia.

To power its electric vehicles, the military is installing the quick charging points at many of its bases.

Opconnect, a company that makes electric vehicle charging stations, announced earlier this year that it would install them at Navy bases in Washington; Indian Head, Md.; and San Diego.

Racasner, the Air Force spokeswoman, said fewer than 50 charging points for road-capable electric vehicles have been installed on military bases, but more are planned.

The Air Force, for example, is installing charging stations at Maryland’s Joint Base Andrews; at Los Angeles Air Force Base, which is preparing to take delivery of 41 new electric vehicles; and at Peterson Air Force Base in Colorado, which will soon receive a pair of electric trucks.

Officials are pondering other locations for recharging stations and how to fund them, Racasner said.

Logo on the side of a Micro-Vett Edyone electric vehicle assigned to Naval Support Activity Naples, Italy. The Navy base in Naples currently has 12 electric vehicles in its inventory.

Sticker on the front of a Micro-Vett electric van assigned to Naval Support Activity Naples, Italy.

Chris Manis, deputy director of installations and logistics at Marine Corps Air Station Miramar, Calif., prepares to plug a Chevrolet Volt into one of the base’s four charging stations for electric vehicles. Miramar received two Volts in July 2012 and plans to field a fleet of electric vehicles.

U.S. military bases are beginning to install charging stations for government-owned electric vehicles, but privately owned EVs often cannot be charged at on-base housing facilities. In Japan, servicemembers with EVs can charge the vehicles at off-base charging stations such as this one near Yokota Air Base.

“Air Force is looking at all types of electric vehicles, but is particularly focused on trucks and vans,” she said. “These vehicles typically, though not always, support public works functions and are sometimes used for flight-line applications.”

A typical commercial charging station costs several thousand dollars to purchase and install, and electric vehicles typically cost more than conventional vehicles — around $30,000 for a passenger sedan to more than $100,000 for medium-duty trucks — but they don’t need gasoline and require less maintenance than conventional vehicles, Racasner said.