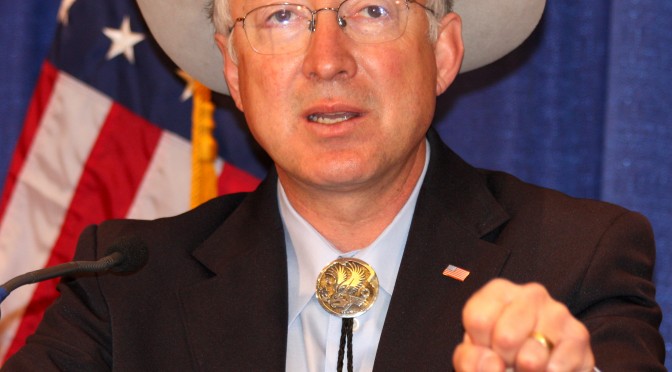 As part of President Obama’s all-of-the-above energy strategy, the Department of the Interior, in partnership with the Department of Energy, will publish the Final Programmatic Environmental Impact Statement (PEIS) for solar energy development in six southwestern states—Arizona, California, Colorado, Nevada, New Mexico, and Utah. The final Solar PEIS represents a major step forward in the permitting of utility-scale solar energy on public lands throughout the west.

Today’s announcement builds on the historic progress made in fostering renewable energy development on public lands. When President Obama took office, there were no solar projects permitted on public lands; since 2009, Interior has approved 17 utility-scale solar energy projects that, when built, will produce nearly 5,900 megawatts of energy—enough to power approximately 1.8 million American homes. Thanks to steps already taken by this administration, renewable energy from sources like wind and solar have doubled since the President took office.

The Solar PEIS will serve as a roadmap for solar energy development by establishing solar energy zones with access to existing or planned transmission, the fewest resource conflicts and incentives for development within those zones. The blueprint’s comprehensive analysis will make for faster, better permitting of large-scale solar projects on public lands.

“This blueprint for landscape-level planning is about facilitating faster, smarter utility-scale solar development on America’s public lands,” said Secretary of the Interior Ken Salazar. “This is a key milestone in building a sustainable foundation for utility-scale solar energy development and conservation on public lands over the next two decades.”

The Solar PEIS planning effort has focused on identifying locations on Bureau of Land Management (BLM) lands that are most suitable for solar energy development. These areas are characterized by excellent solar resources, good energy transmission potential, and relatively low conflict with biological, cultural and historic resources. The Final PEIS identifies 17 Solar Energy Zones (SEZs), totaling about 285,000 acres of public lands, as priority areas for utility-scale solar development, with the potential for additional zones through ongoing and future regional planning processes. The blueprint also allows for utility-scale solar development on approximately 19 million acres in “variance” areas lying outside of identified SEZs. In total, the Final PEIS estimates a total development of 23,700 megawatts from the 17 zones and the variance areas, enough renewable energy to power 7 million American homes.

“Input from stakeholders has been extremely valuable throughout this process,” said Acting BLM Director Mike Pool. “Their comments have helped to refine the zones to make sure they’re ‘smart from the start’, to improve the transmission analyses and to build effective incentives into this blueprint for solar development.”

In support of more detailed system-level analyses of transmission needs, the BLM is engaged in ongoing transmission planning efforts, including through the Transmission Expansion Planning Policy Committee and the Western Electricity Coordination Council’s transmission study.

The July 27 Federal Register Notice of Availability for the Final PEIS will begin a 30-day protest period, after which Secretary Salazar may consider adopting the document through a Record of Decision. The BLM released the Draft Solar PEIS in December 2010, and in response to the over 80,000 comments received from cooperating agencies and key stakeholders, issued a Supplement to the Draft Solar PEIS in October 2011.